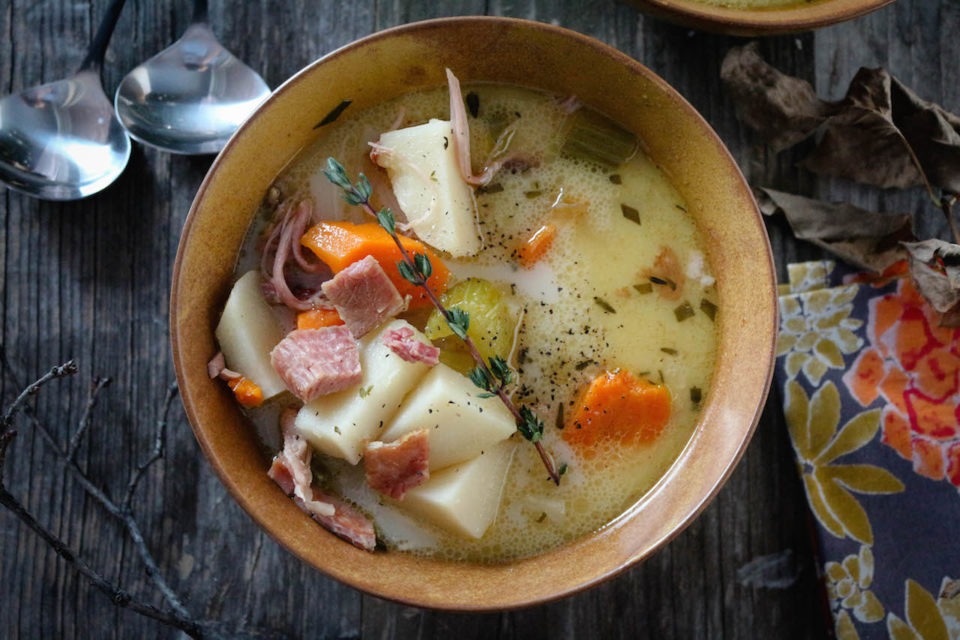 I’m still hungover from our gym Christmas party on Saturday. Still. And honestly, I didn’t even drink THAT much. I’ve been a straight up complete mess in past years, taking pulls from the bottle, falling, blacking out. All that jazz. But not this year. This year I made sure to have dinner beforehand and when I was handed a bottle and yelled at by drunk people to take a swig, I poured a shot into a red solo cup to take tiny itty bitty sips of. But those little sips were fireball. Which seems to be consumed every Christmas party. What the hell is that about? That sh*t is what terrible hangovers are made of.

So even though I stayed away from people’s germs, didn’t fall down in my short dress and sky high heels and didn’t black out whatsoever, I still stayed out until almost 2:30am. Just at the gym. Which means I danced from 10pm-2am since we had a DJ. Nonstop dancing. I finally decided I need to go home when I could barely walk, even without the high heels on. So I called an uber, waited, then once I saw him pull up, I started saying goodbye then instantly saw my friend jump in my uber and speed off. B*tch stole my ride. So I called the uber guy to let him know that the human inside his car was not me and to not charge me. He was too dumb to figure out how to solve the situation so I was charged for her ride. WTF bruh. I gave him a drunken 1 star to show my hatred for him.

I woke up the next morning, after only 4 hours of sleep feeling not so hot. So I chugged water, made some breakfast and went back to sleep. When I woke up from my nap to a headache, I decided more napping was in order. Then gluten free pizza. Then Christmas movies, How To Get Away With Murder and more napping. I showered and brushed my teeth by 5pm. I still felt like crap on Monday after mixing vodka, sake and fireball that Saturday night. Will I ever learn?

I honestly wonder if I should just swear off alcohol all together. I mean, I don’t like the taste of it, I don’t really like being drunk and I DEFINITELY don’t like the hangover that gets worse through the years. So why drink it? Because it’s what social people do? Ehhhhhh, I guess I’m just not social. Maybe I’ll just swear off alcohol until our wedding night, when I don’t have to fit into my wedding dress any longer. Four months doesn’t seem that long, right? 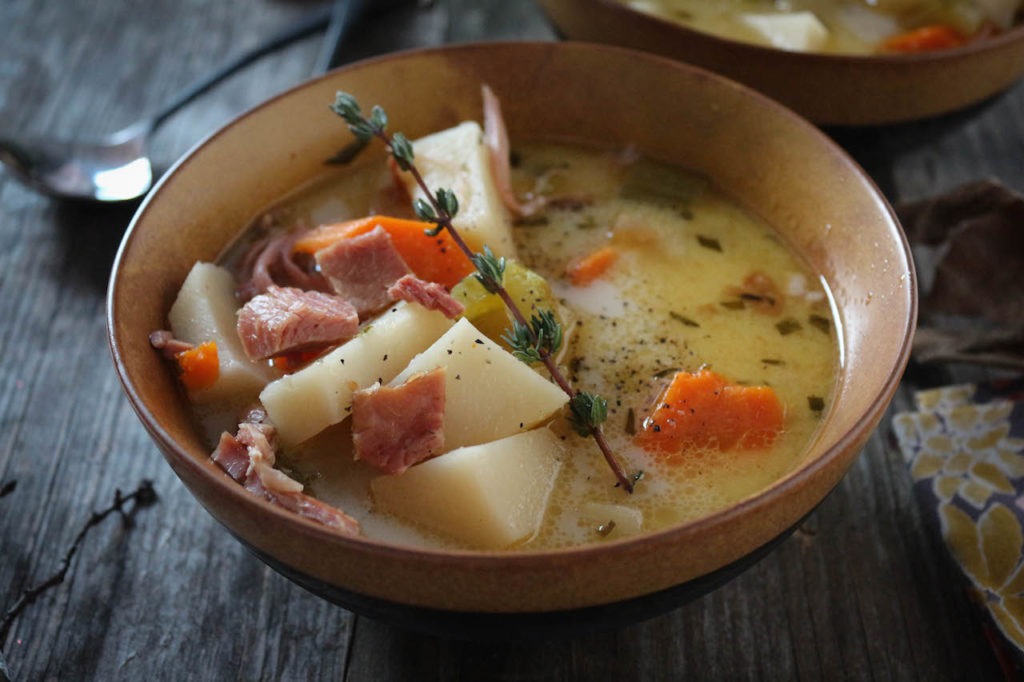 *If you don't have a ham bone, you can ask your butcher for beef bones or sometimes find them by the freezer bag full in specialty grocery stores. Also, my ham bone had a lot of ham left on in which I left, then just shredded off the bone once the soup was done cooking. If you aren't using a ham bone, add more ham to your soup than the recipe actually calls for. 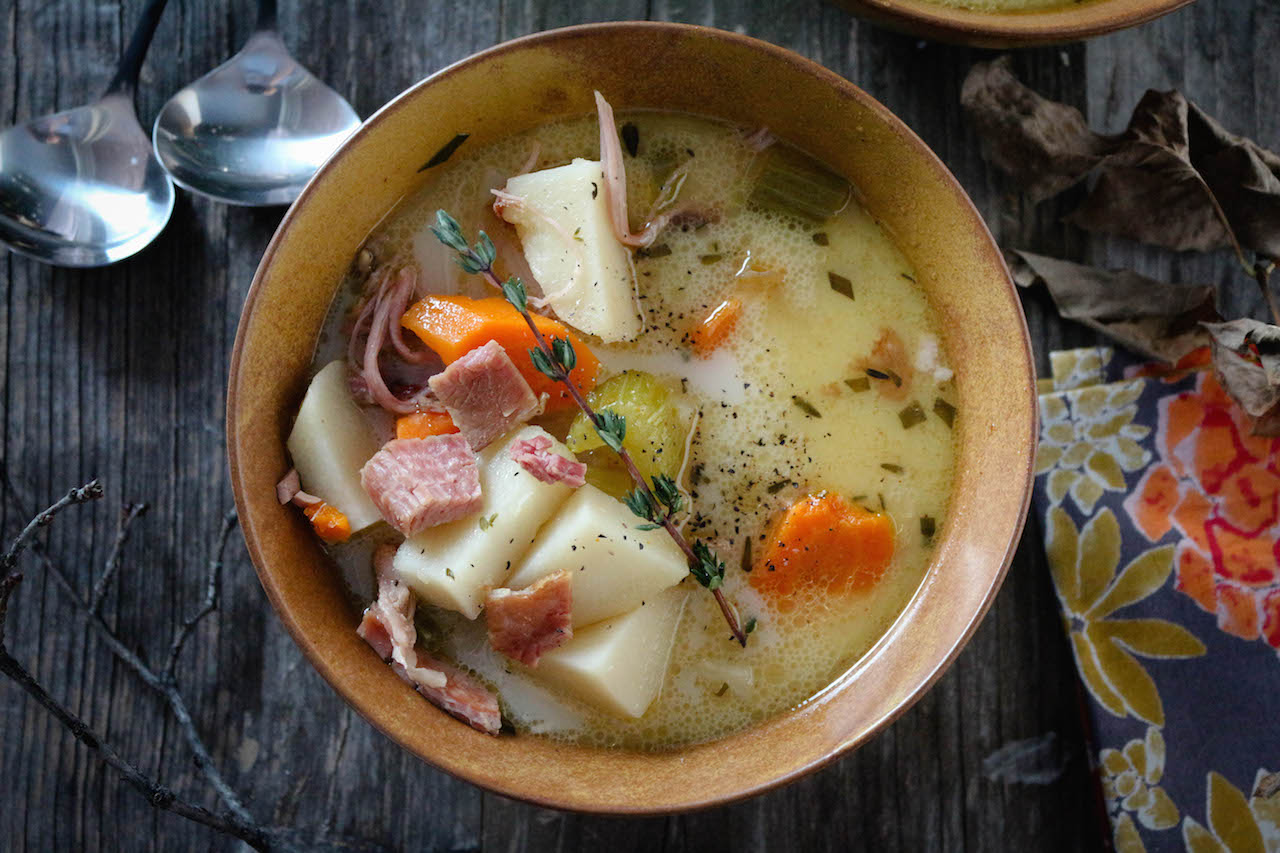 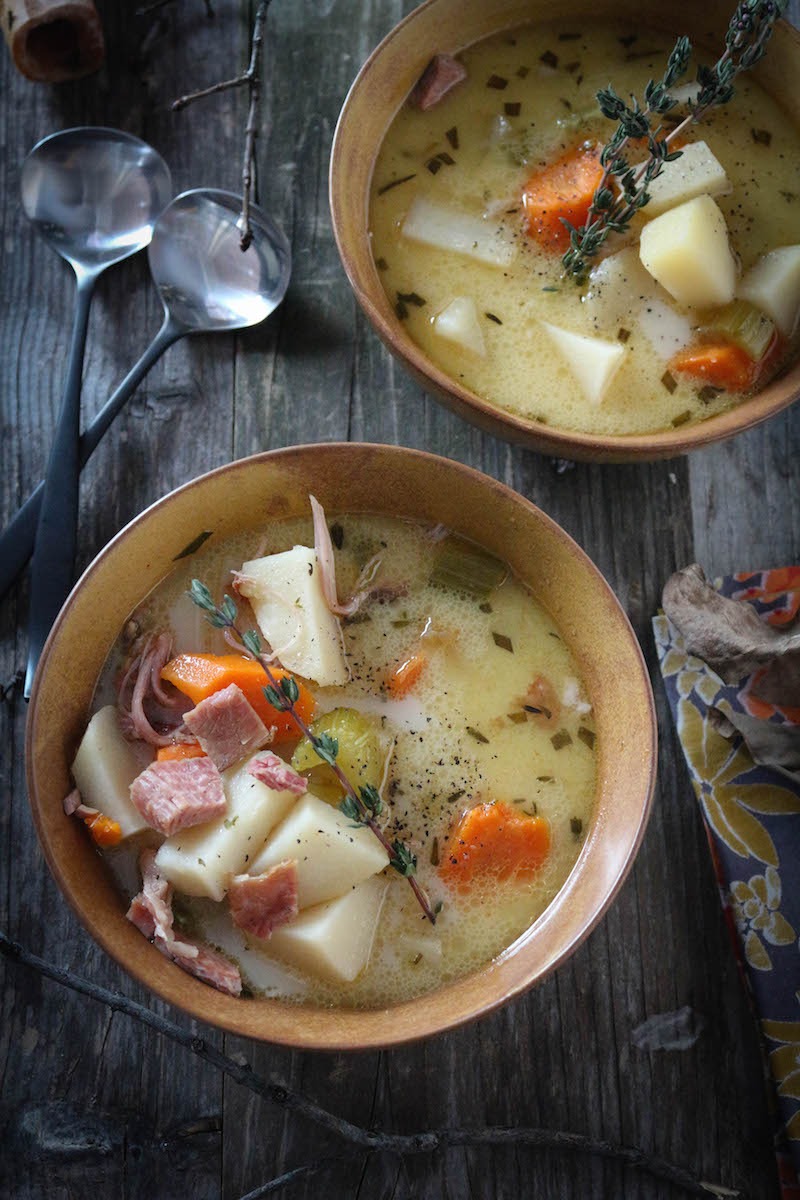 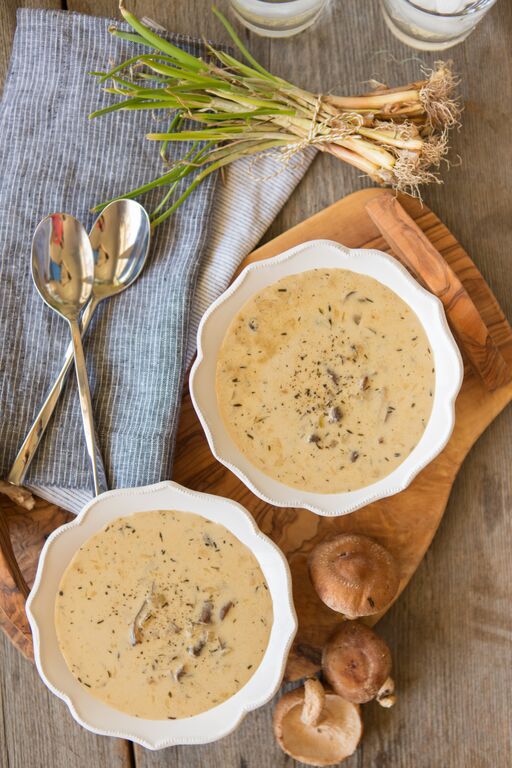 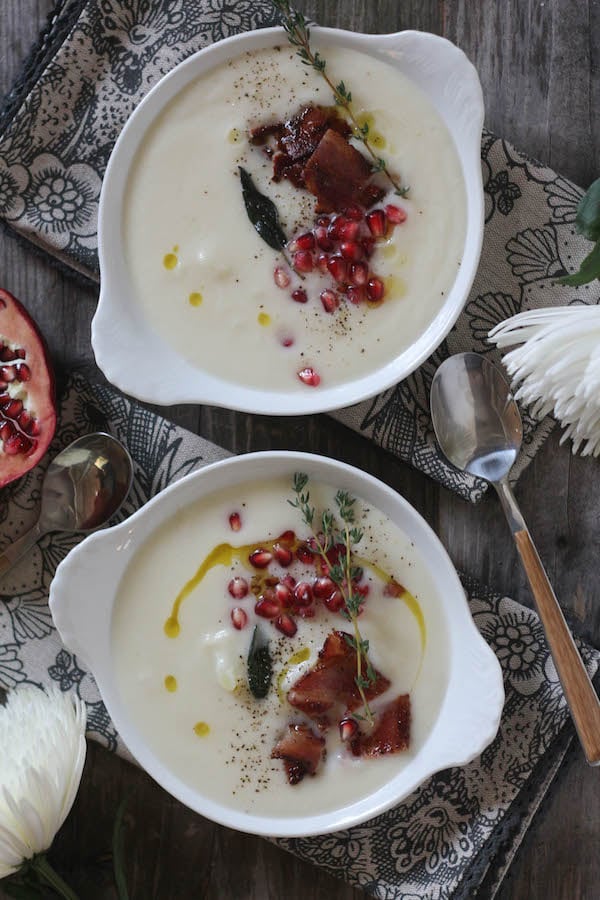 Make & Serve This Dish With: 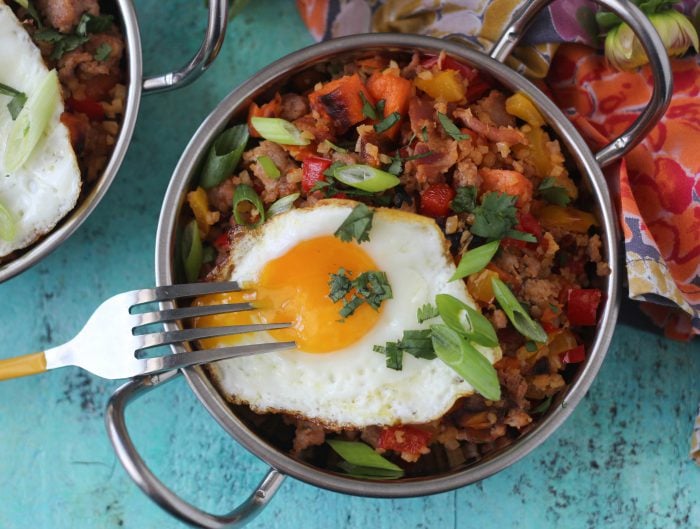 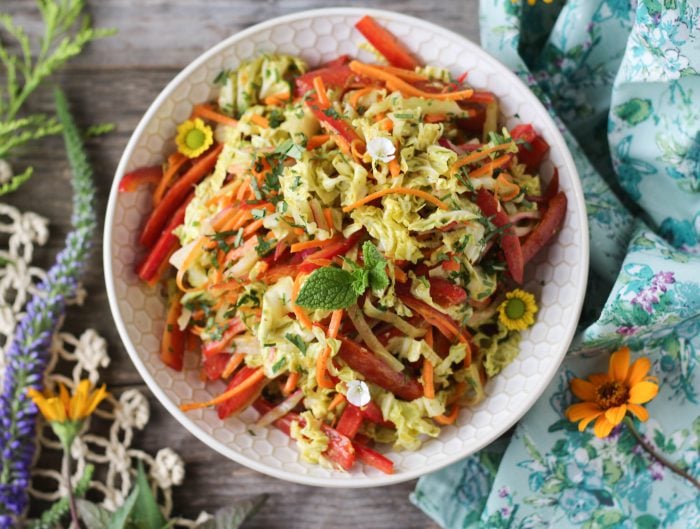 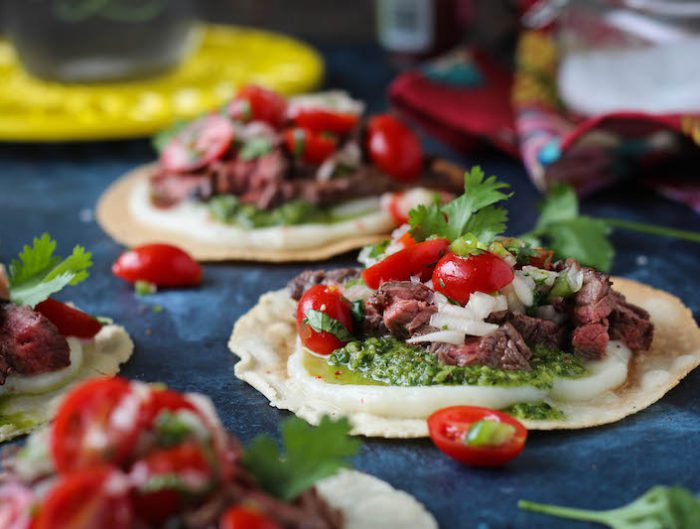 At this point 2 glasses of wine is my limit and even then I’m not feeling great the next day. I like your hangover plan of napping and gluten free pizza though :)

I had to swear off alcohol. I just can’t… sometimes it sucks but most of the time it isn’t even that bad.

This soup looks so delicious. I want a bowl right now. After seeing the teaser photo on your Instagram, I actually went out and purchased a Christmas ham in anticipation of making this soup. Normally ham isn’t my favorite but my entire family is descending upon my house today so I figure I’ll make them eat the ham and then I’ll get the soup. Sounds fair, right

The manfriend and I took a fab distillery tour and taste in Golden this last weekend – State 38, ALL agave based spirits…dayum – and found out an interesting factoid about Fireball Whiskey (this just hours after passing a display of the stuff at the Liquor World and thinking, “Oh how holiday festive!”)

Fireball was what gave me my epic hangover this weekend as well! I’d be careful giving up booze for 4 months and then letting loose on your wedding night. I feel like you’re asking for a bad time dropping your tolerance all the way down to nothing lol.

Can’t believe that happened with your uber, lame that he couldn’t fix the billing.

This looks fantastic! My family always has ham for Christmas dinner so I’ll definitely be making this.

Question…I thought the only potatoes that were really “paleo” were sweet potatoes….have i been doing it all wrong for the last 2 years? I’ve totally fallen off the wagon since before Thanksgiving and I feel like a giant potato myself. So, now that Christmas is over, I’m trying to get set straight….even sitting here at the computer, I feel as if I might roll over like the blueberry girl in Charlie and the Chocolate Factory. HaHa!!!

if your goal is to lose weight or you’re not working out on a regular basis, starchy vegetables or tubers are not the best food for your to be consuming. sweet potatoes have more vitamins than white potatoes, which is why they are often consumed more than white potatoes for “paleo people”. white potatoes have always been a grey area for paleo, but for me specifically, since I work out daily and I’m not worrying about weight loss, I eat them on a regular basis to help fuel and make sure I’m getting adequate calories and carbs. when i’ve tried to lose weight in the past, I stuck with good protein, dark leafy greens and good fat!

I have a question about reheating leftovers from the soup. So if the ham is pre-cooked and then re-heated to make the Christmas ham, then re-heated again for the soup, would it still be safe to re-heat the leftover soup? It seems like it wouldn’t be since the ham would be in its fourth round of being re-heated. I have a HUGE pot of this going right now though, and I don’t want the rest to go to waste after we eat maybe 3 bowls of it tonight.

i did! i reheated mine multiple times

This soup was incredible! I made it on the stove instead and added about a half cup of leftover Christmas mashed potatoes to thicken it instead of the cream. The combo of spices/herbs and the tasty ham made this soup!

great idea thickening it with potatoes!

I haven’t been doing well with alcohol either, ugg why was it so easy to stay up till 5am and drink when I was younger?! I don’t really even drink that much and feel like crap the next day. Two drinks max for me or else I’ll be sorry. I’ve had that experience with fireball about 2 years ago and haven’t had it since lol This soup looks so comforting!

Use water not broth. I use low sodium broth and this was so salty I almost threw the whole batch out. Instead I will strain out half the broth and replace with water to see if it fixes it enough to eat it.

oh no, i guess i never use borsht with salt since i add salt to everything!

OMG this soup turned out so well and was super easy! I had most of the ingredients, including the ham bone, but made it work with the veggies and herbs I had on hand. Just picture coming in from doing a workout in the cold or coming home after a long day, this soup will warm you right up and make you feel all cozy inside. I can’t wait to try out some new varieties with other meats.

So good! I made it last night and it was even better today. I added in a can of Rotel and it gave it just a bit of spiciness. Thanks for the great recipe!

This is the best soup I’ve ever made… Thanks Juli for that recipie!
I used beef bone broth – what rich and decadent flavour … And the sweet from the ham was a perfect compliment!
This is going to be a staple at home from now on!

awesome!! so glad to hear it!!

Do you have tips for cooking this in the Instant Pot? Like throwing it all together and hitting the soup function (which I think is 30 minutes?) or…a different cook time? Definitely want to make this but these days I’m using my IP way more than the slow cooker.
Thanks!

i think the soup function will definitely work for this recipe!!

Hi Jenny, did you get a time on this soup for the IP??