How CrossFit & Paleo Took Over My Life 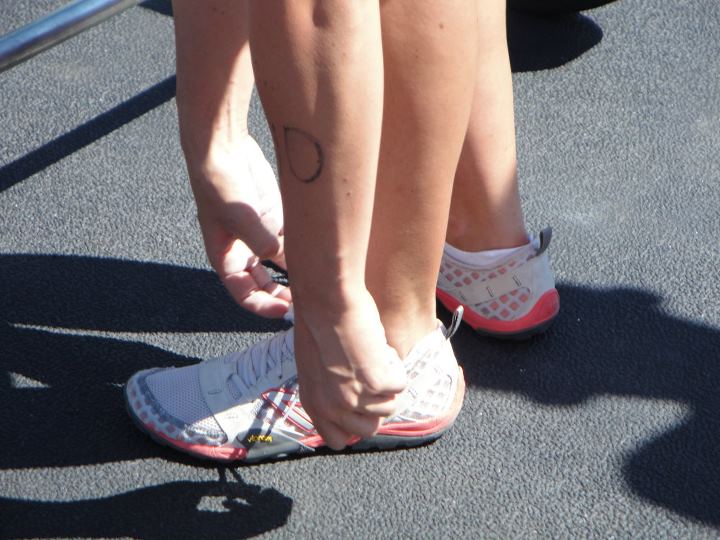 Here’s my background. I didn’t really play sports growing up. I swam for 9 years of my life on a summer league and just a little in high school. I was never extremely good at it, but I lived at my pool in the summers so it was just what you did. I never tried any other sports because I was too scared. I was too scared to try volleyball because I would have to wear spandex shorts. I was too scared to try lacrosse because I didn’t think I was cool enough to fit in with those girls. And I didn’t run track (well, for a month I did) because I sucked at running. And hated it. So sports didn’t really suit me. So I kept to myself, sang in choir, and worked out on my own…not knowing what the hell I was doing.

I had a couple personal trainers growing up that helped me get a little bit more into being in the gym and comfortable with lifting weights. I had boyfriends who were always into fitness so it made me want to try it and look cool. Obviously, that didn’t help me. But it made me never really feel intimidated with lifting weights around dudes. Lifting weights always gave me some sort of empowerment feeling.

So when I was in college, I worked at the student rec center where I began to work out more and more. And, of course, this was where I met my college boyfriend. I actually started talking to him because he would come into the gym, do a 20 minute workout, be drenched in sweat, then leave. I didn’t get how he could get in such a good workout in such a short amount of time. Long story short, we started dating, I weighed in at about 150lbs and was not in shape AT ALL. So, to try to keep my boyfriend around, I started doing CrossFit on my own in a small gym so I could do workouts with him.

I began searching the archives of crossfit.com, watching all the videos, figuring out how to clean and snatch, and trying all these things out by myself in the student rec center and the small private gym I went to. I taught myself the kipping pull up on the pull up bar in the park and bought my own jump rope to practice double unders 20 minutes a day.

While just doing CrossFit, I lost about 15 pounds. The more I read through crossfit.com, the more I began to understand how important eating healthy was. So I put on my big girl pants and started asking questions. My boyfriend at the time ate Zone, so I cleaned up my diet a bit, started eating zone portions and lost almost another 15 pounds. That means I got down to almost 120 lbs. I’m 5’7. That was the smallest I had been since I was in junior high.

So after about 6-8 months of doing CrossFit on my own, I decided to join my first CrossFit gym, CrossFit Evolve. They started teaching me how to actually lift correctly and dealt with my excessive tape use from ripping my hands every day. After only about 2 months there, I moved and started working out at a bunch of different CrossFit gyms in Denver.

This was when I decided to go paleo. All the way. I hated the idea of it, thought it was stupid, and refused to give in, but my then boyfriend and I decided we would try it together. The CrossFit gyms we went to both promoted the diet so we thought it was worth a shot if it would make us better at CrossFit. So I started cooking a ton more, looking at paleo recipe blogs, and reading The Paleo Solution and the Whole30 a ton. I fell in love with websites like Balanced Bites, Mark’s Daily Apple, Everyday Paleo, Health-Bent, Elana’s Pantry, and a ton of smaller ones. And I finally began to cook for myself for the first time in my life. And loved it. I loved trying new things and seeing that other people, who didn’t even eat paleo, liked those meals. So I started making my own meals and before I knew it, I was writing the nutrition blog for CrossFit Flex Gym and then finally started writing my own (mostly so I could cuss more and write whatever I wanted).

Now, it wasn’t until I started working out at CrossFit Broadway that my body really changed. Once I began working out with dudes that made me lift heavy and fast, I put back on almost 30 lbs. That means I went from 120 lbs to 150 lbs in probably 6 months actually eating cleaner and working out harder. Funny world we live in, just hilarious. I do have some hormone issues that I haven’t been able to figure out, but mostly I think I put on weight because my body was trying to figure out how to deal with the stress being put upon it with lifting so much more weight.

So here is the summmary. I’ve been eating paleo for over a year now and CrossFitting for over 2 years. I went from 150lbs of NO muscle to 120lbs of some muscle and NO fat to 150lbs of lots more muscle and some fat. I’m not shredded like a lot of the CrossFit women out there and I truly wish I was smaller. BUT I would never in a million years lift less to lean down. Never. I have worked very hard for 2 years to become stronger and fitter and to think about lifting less than my body is able, is just stupid to me. CrossFit has given me the strength to do things I didn’t know were possible so why would I deny those things and make myself weaker just for asthetic appeal?

I still play around with my diet monthly. I’ll cut out nuts, I’ll cut out fruit, I’ll try new vegetables, eating less protein, eating more protein. It’s a never ending process trying to figure out what my body likes and dislikes. And it’s ever changing. What my body liked a year ago when I started paleo is completely different than what it likes now. So it’s annoying. And listening to your body it’s a tough process.

CrossFit and paleo pretty much run my life. It’s often a love-hate relationship. I hate that I can’t eat a pound of almond butter in one sitting because I’ll crap myself all week. But I love that I can feel 10x better eating almond butter than I did when I ate grains. I hate that my ass and legs are bigger than they ever have been, but I love that they can lift more than they ever did before.

So that’s my story. It’s not that interesting, but hopefully it helps you with figuring out how you want to lead your life of healthy eating and healthy living. Do what makes you happy. Whatever that is, just do it. You only live once. And if you have any questions, feel free to ask. I’m sure I left out a ton of stuff.

172 thoughts on “How CrossFit & Paleo Took Over My Life”