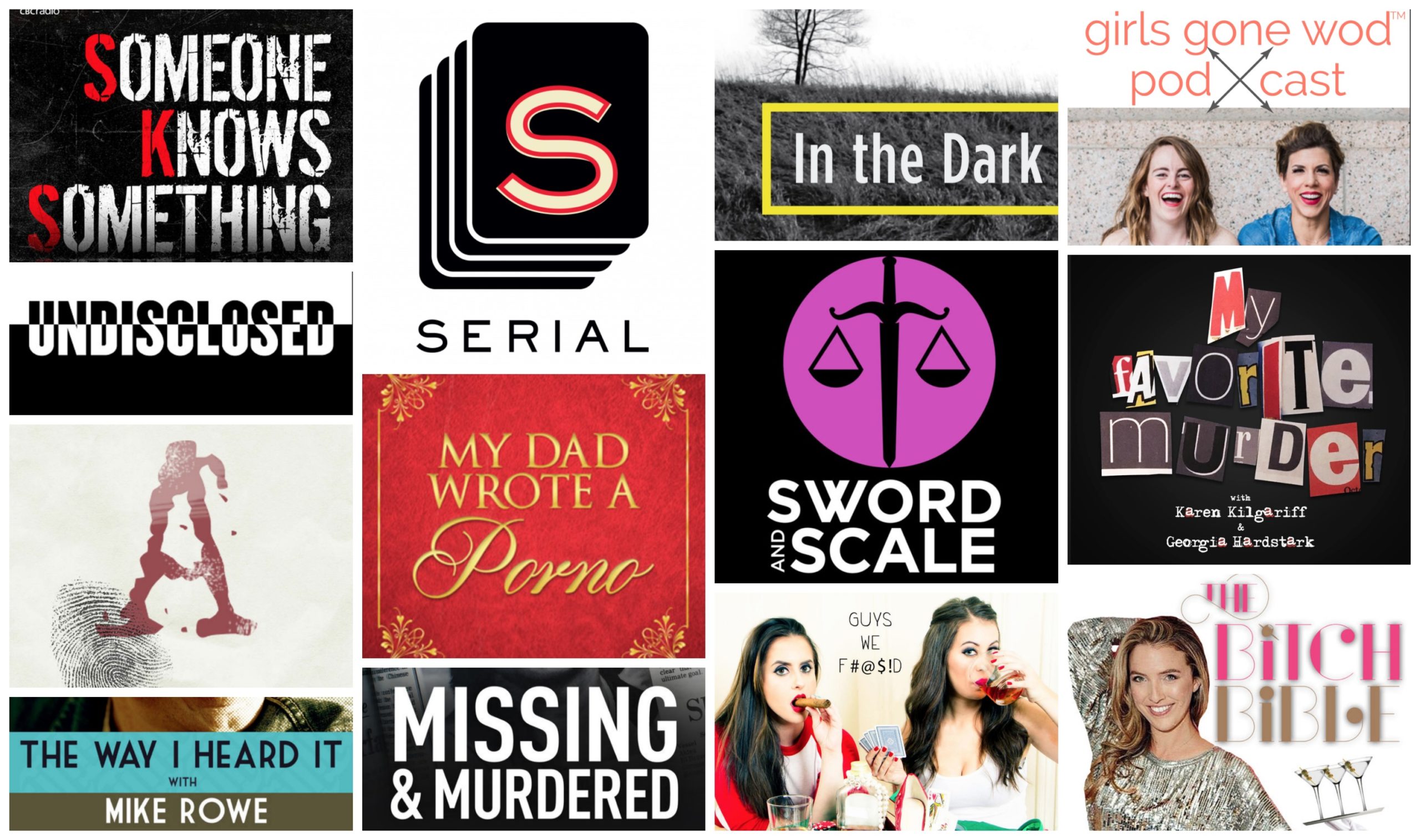 So based on my podcasts, I’m into murder and sex. Coooooool. I’m more so into stories, confident women, and people who will tell it how it is. Which is why I obviously HAVE to recommend my own podcast. Plug. For any of you that listen, I love you. For any of you that don’t, I hate you. Ok, I only hate you when you leave an angry mean iTunes reviews. Who does that? If you don’t listen because you just find me overwhelming, that’s fair. But you most likely won’t like my recommendations. Most of them are pretty intense and not for the faint of heart. Hope these help add to your own podcast list and feel free to leave your own podcast recommendations in the comment section below!

Serial – I think Serial is a podcast that gets people interested in podcasts. It was the first podcast I ever listened to and I finished it within days. It has two seasons, the first one about Adnan Syed and the death of his ex-girlfriend Hae Min Lee. The second season is the story of Bowe Bergdahl and his choice of walking off his Army post in Afghanistan which led to his capture. Many people I’ve heard from say that they are bored with the second season, but I think it’s incredibly interesting. From his story to why he walked off his post, to the inconceivable torture he endured in captivity. Both stories are truly insane and the podcast is so well put together. I can’t wait for season three to finally come out! I wonder what it’s going to be about?!

Undisclosed – If you like Serial, then you will most likely like Undisclosed. One of Adnan’s friends takes a closer look into his case and all the wrongful convictions in the US. It really gives you even more detail into his case and makes you wonder why the hell this guy is in jail. I really liked this podcast, but I haven’t gone through all the episodes in season 1. It’s sometimes hard to keep track of all the evidence and is tough to understand if you aren’t listening to all episodes in a row. But it really makes you question our criminal system, that’s for sure.

Accused – Another podcast showing the mishandling of a investigation and an unsolved murder of Beth Andes. I listened to this a while ago so I’m forgetting some of the details but I loved this podcast and it’s a shorter one so it’s easy to get through the entire thing.

In The Dark – This podcast is about the Jacob Wetterling case, a boy who was abducted in the 80’s. This case was one that changed history by creating laws around sex offenders registries. The podcast talks about what went wrong in the case and delves deep into all the details. It’s a short podcast, only 9+ episodes so it’s pretty easy to get through.

Sword & Scale – This podcast is not for the faint of heart. Like, at all. It’s extremely difficult to listen to and I’ve had to turn it off many times. It shows the horrors of this world. Any scary movie you’ve seen, but actual real stories. It’s terrifying. And one of the things that has made me fear having children. Mostly because I’m scared of the people they may have to face, but also because they may kill me. It has stories that will blow your mind like the story of Johnny Gosch and the real life child sex rings that are happening in the US, to stories about how death row is actually much more comfortable for inmates then general public. It’s really tough to listen to and makes you trust no one, but it also opens your eyes to things you had no idea were happening. You were warned, though.

My Favorite Murder – Two women comedians come together to talk about their love for true crime and murders. It sounds weird and I’m sure it’s offensive to some, but they are just simply telling murder stories and having a good time together. They have 50+ episodes at this point and are easy to listen to and keep things light and interesting!

Someone Knows Something – This podcast has 2 seasons now, I just started up the second season. It’s another murder mystery podcast where the reporters go back through all the evidence, track down the others involved and truly try to solve the case. The first season is about Adrien McNaughton, a child who went missing while fishing with his father and friends. And the second season is about Sheryl Sheppard, a woman who also disappeared and has been a cold case ever since. It has a similar feel to the podcast below. It’s just interesting hearing all the details and wondering why they haven’t caught figured out more with these cases.

Missing & Murdered: Who Killed Alberta Williams – Similar to the podcast above, Missing & Murdered is a story about an indigenous woman who was murdered in British Colombia and why many have been afraid to talk after the history with the police and government. It tries to begin to uncover more details of her terrible murder and is still an ongoing podcast.

Up & Vanished – This podcast is about about the disappearance of Tara Grinstead which is an 11 year old cold case. The host’s goal is to solve this mystery by re-examining of the case, interviewing people who had to do with the case and answering listeners questions along the way. I sometimes get a little bored with the episodes that he answers people’s questions so I tend to skip over those. This is still an ongoing podcast.

Guys We F****d – Has over 160 episodes so you have A LOT to listen to if you are just starting out. If you are not comfortable with cussing or talking about sex in full detail, then this podcast is not for you. This podcast was started by two women comedians out to end slut shaming and promoting women exploring their sexuality and being proud of it. They bring men on the show that they have slept with in the past and talk about those nights and the whole experience. It’s quite interesting if you don’t get offended easily. These women are bold and proud of their experiences and I dig it. And it’s always fun to hear what other people get into in their own private lives!

The Bitch Bible – This podcast is hosted by a hilarious woman named Jackie Schimmel who says whatever the hell she wants to say, no filter. Again, if you don’t like cussing, then I don’t know why you’re even on my blog, but she cusses up a storm and has a sense of humor that only some people can take. I love her. She’s unapologetic, talks a ton about pop culture, and interviews random people. She just don’t give AF and I’m into it.

Girls Gone Wod Podcast – Joy and Claire, two friends made from a CrossFit gym, come together to talk about literally anything that’s going on, interview many people in the fitness and health world, and laugh hysterically along the way. I listen to them because I personally know them and have been on their podcast multiple times, but they are just fun and enjoyable to listen to!

The Way I Heard It with Mike Rowe – You know Mike Rowe from the show Dirty Jobs? Well his lovely voice records short podcast episodes, only 5 or so minutes, with stories of people you may have heard of, but never knew their short version life story. From Bruno Mars, to the inventor of plato, to the person who created Pringles, to Johnny Cash. He tells these little stories to only reveal who he is talking about in the last few sentences. It’s wonderful. And his voice is like butter.