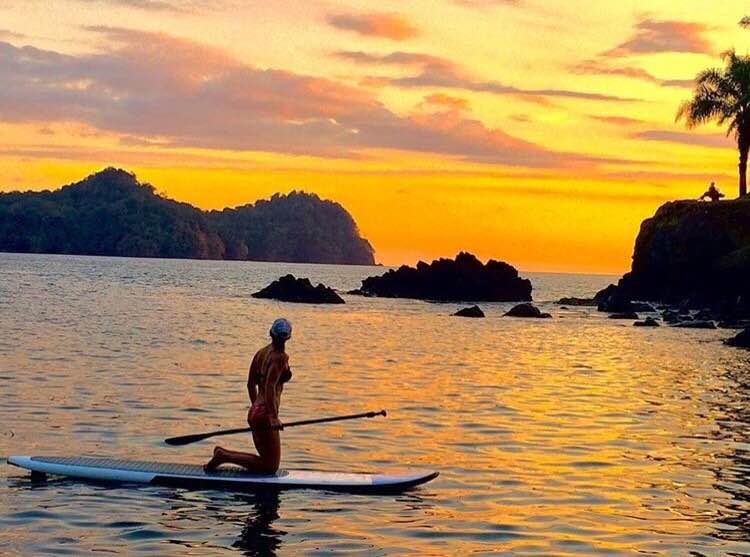 As I type this, I am flying over Little Rock feeling as though my butt has fallen off. It’s gone. I have no butt because I have been sitting on it all day long while flying back from Costa Rica and it has become one with the airline seat. Have you ever thought about the seats in airplanes? How many odd smells and growths and bacteria is has on it. Creepy huh? Well my butt is that creepiness now. I can’t wait to get home and shower. Flying is the worst.

But Costa Rica is not.

This was my first time going to Costa Rica and I have to be honest, I was a bit nervous. Back in July, I decided that I would team up with Under 30 Experiences to create a PaleOMG retreat where we would workout, eat food, and just get to know like-minded people from around the world. But when I agreed to doing it, I truly didn’t think anyone would sign up. I thought it would be radio silent and forgotten all about. But that was not the case. Within a week, the retreat filled up with 20 people and I began to realize that I was actually going to get to go to Costa Rica in January. With complete strangers. Which is quite an odd idea when you start to think about. Going to a foreign country alone, meeting 20 strangers then hanging out with them for a week straight. Sketch, huh?

Thankfully no. As I flew into Costa Rica, I was a ball of nerves. Since I landed at night, I was sure I would get lost or just feel lost. But once I landed, that was not the case at all. Everyone was so friendly and so welcoming, eager to help in any way. I got in a day early so I didn’t get to meet anyone until the next morning, where me and the Under 30 Experiences team member (Cesar) and my good friend Adam (who actually talked me into doing the trip) waited for the rest of the group to show up. People began to trickle in: a couple from Pennsylvania, a couple from Virginia, a girl from New York, a couple ladies from Boston, then we had Idaho, Texas, three from Denver, one from North Carolina, a couple from Louisiana, and now I’m forgetting all the other places. But there was a lot. Mostly from the east coast. Probably because the winters blow there and people need light at the end of the tunnel.

Anywho, right away we all headed to a beach called Playa Hermosa, stopping at a little smoothie and food stand to look at some giant crocodiles along the way. During the ride there, you could tell everyone was a little uncomfortable. None of us knew each other or knew what to talk about or really even knew what to expect. So most of the time, we all sat quietly thinking about it all. But then once we got to the beach, it was go time. We created a workout for everyone to do in groups. Instantly they started to chat a little more as soon as the workout ended and we headed to a restaurant for some food. After that, we headed to our hotel an hour or so out and pretty much all passed out from working out and traveling exhaustion.

But instead of explaining every single day to you guys, which I’ve probably forgotten because I have the memory capacity of a squirrel, I’ll give you the highlights. We stayed in Manuel Antonio which is pretty much a mountain with an ocean at the bottom of it. So almost every day included an early morning workout followed by lots of walking or taking the bus to wherever we wanted to eat or play. What I wasn’t fully prepared for was all the walking/hiking. I’m totally cool with walking my face off, but not having the right shoes for that kind of business sucks. Every single night, I would fall into a deep sleep from exhaustion, with my feet burning after wearing the worst flip flops of all time everywhere. So not only were we strengthening our little baby feet muscles in the sand while we did runs or sprints, but I was strengthening my feet while hiking up 47 steps on the side of a mountain. My feet are so f*cking strong now.

Other than working out with the group in the morning, every day included some sort of activity whether that was paddle boarding, going to the farmer’s market, walking around town, hanging out at the beach, surfing, zip lining, going to the gym, eating, drinking, pooling it, or just hanging out with other. There’s was always something to do and you could either stick with the group or wander off to find your own adventure. The whole trip was super flexible.

Here were my favorite parts about Costa Rica:

Meeting everyone and getting to know them more as they opened up and showed their true personality. No where else would I have ever met these people. And I truly can’t wait to see them again. I told them to contact me whenever they are in Denver and I plan on emailing them whenever I head back out traveling the states again. 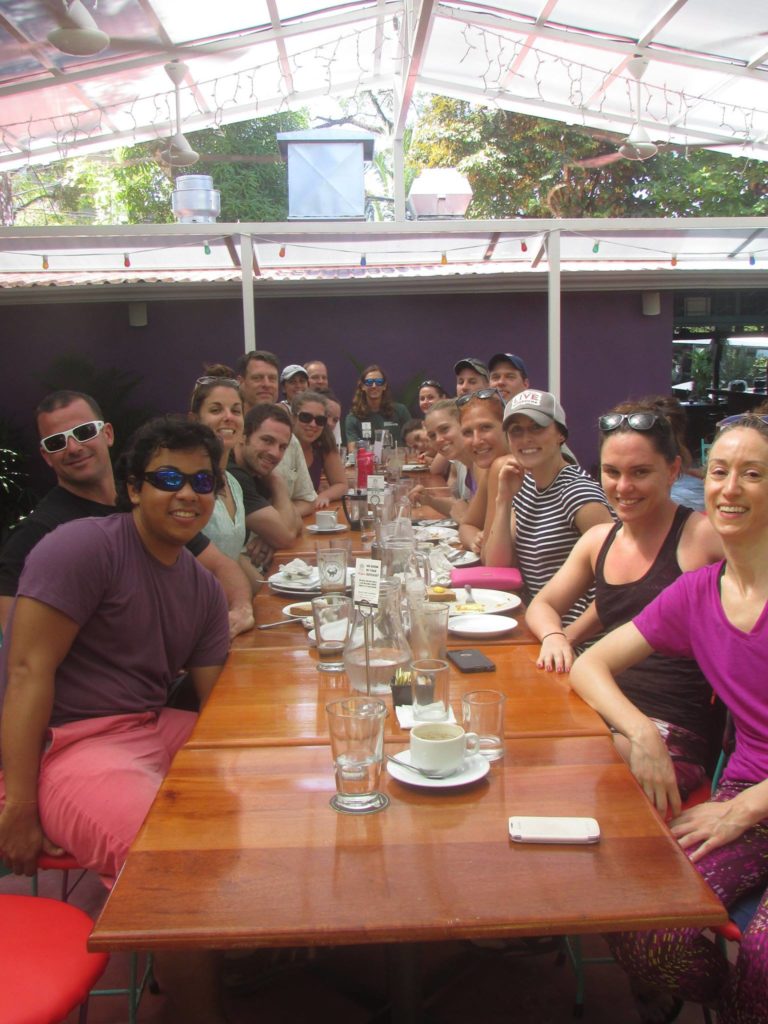 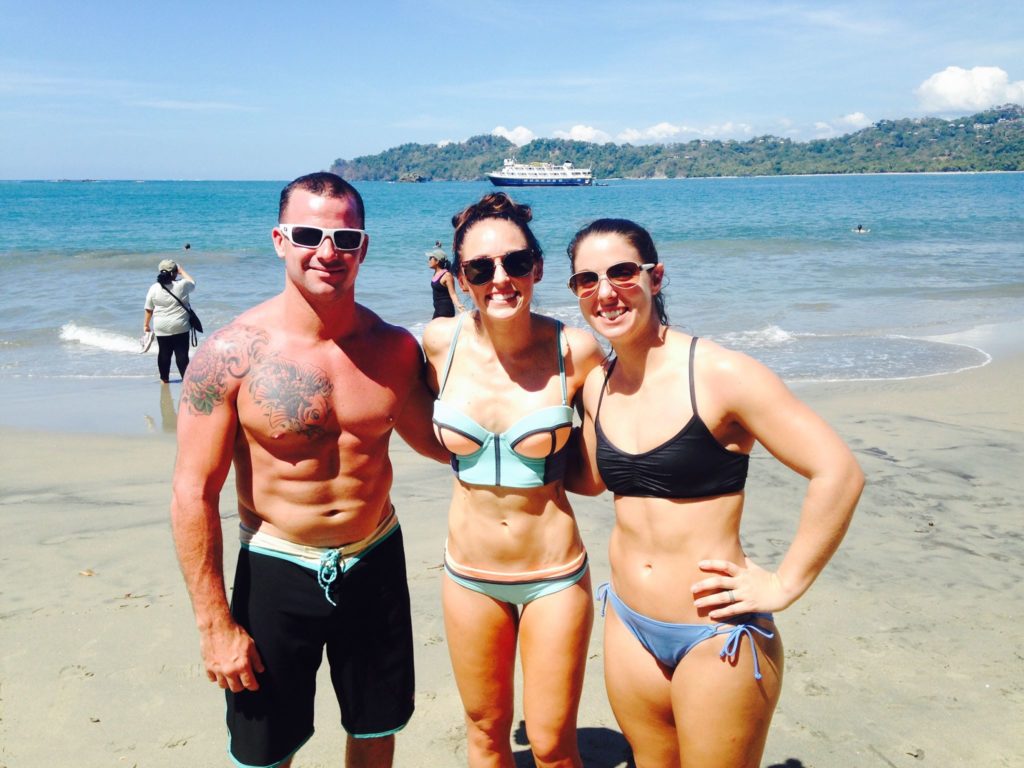 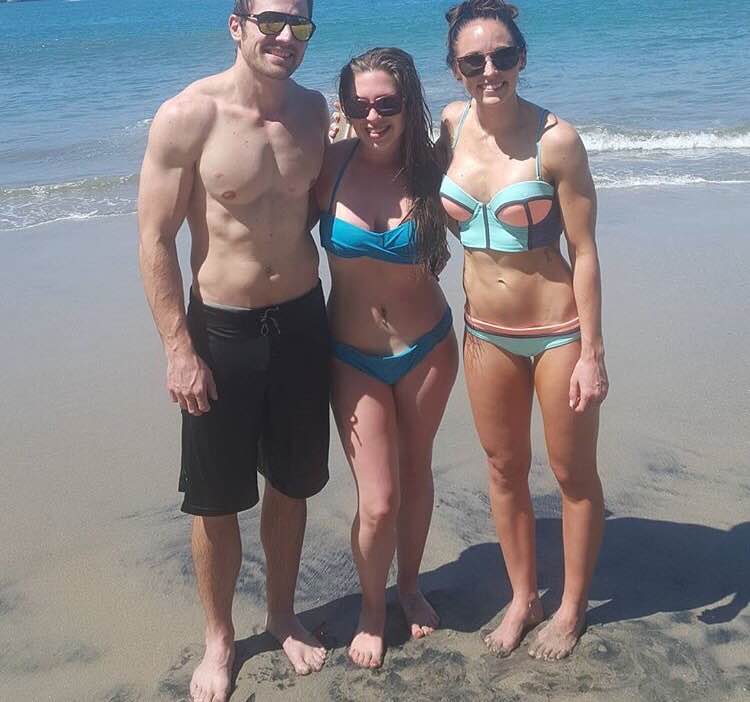 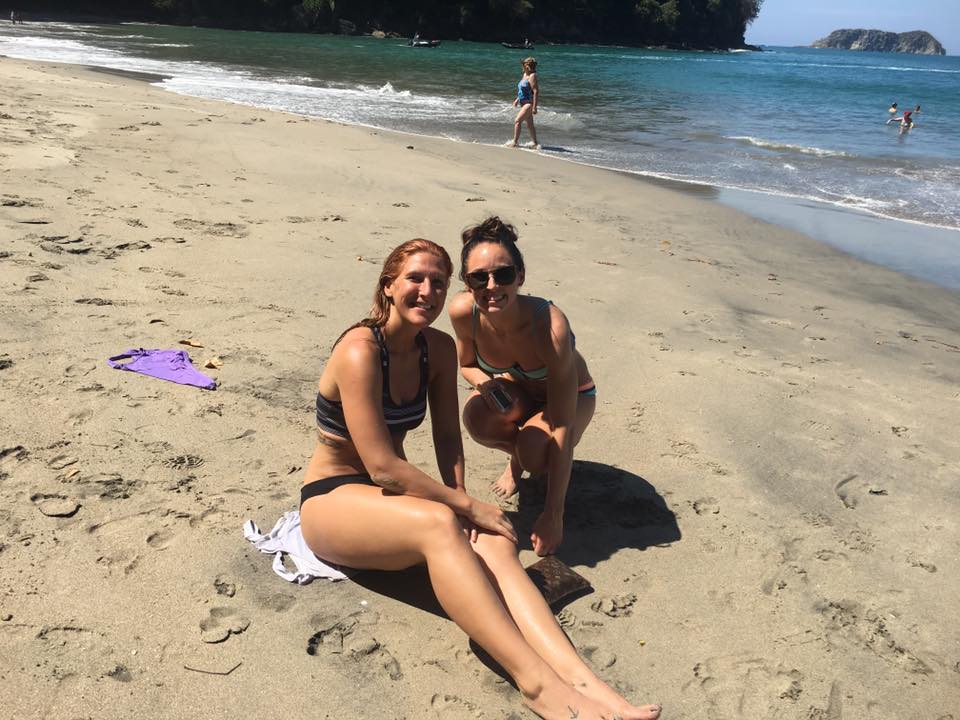 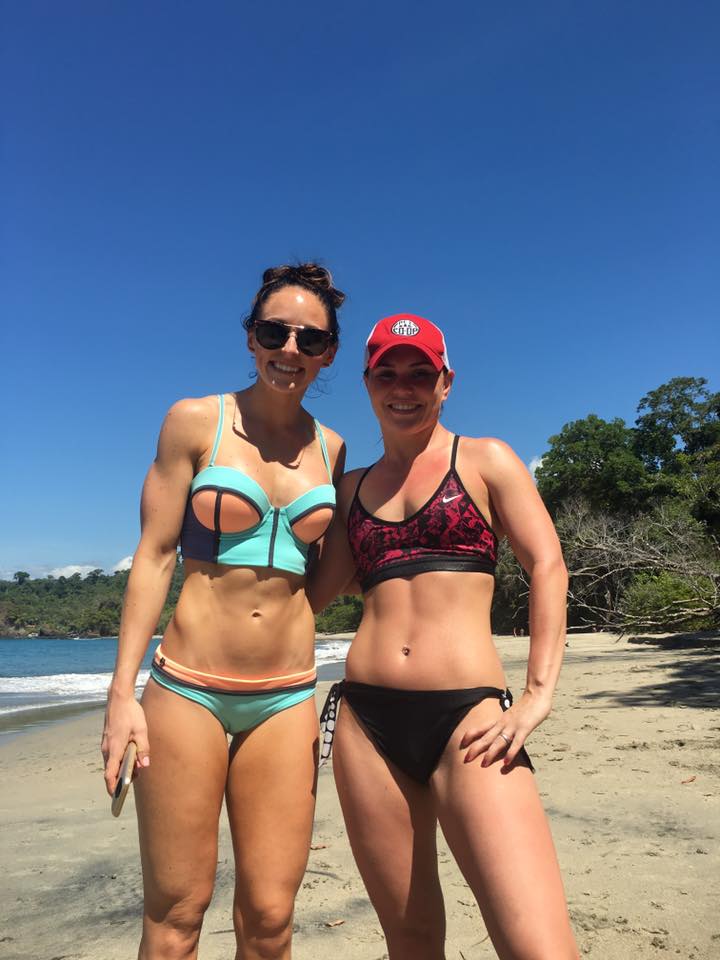 The farmers market! We wandered down a couple miles to the farmers market and shopped their fruits, veggies, meats, seafood, clothing, trinkets and even treats! On our way out, one of girls told me about the ceviche she found and it was seriously the best ceviche I’ve ever had. Hands down. 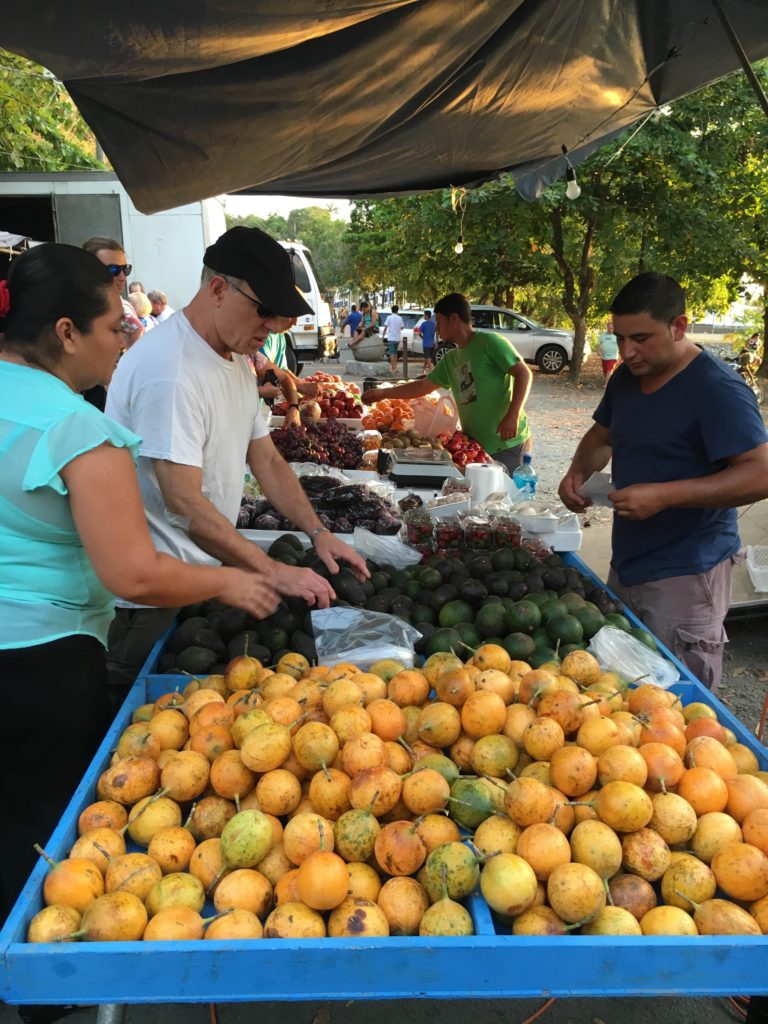 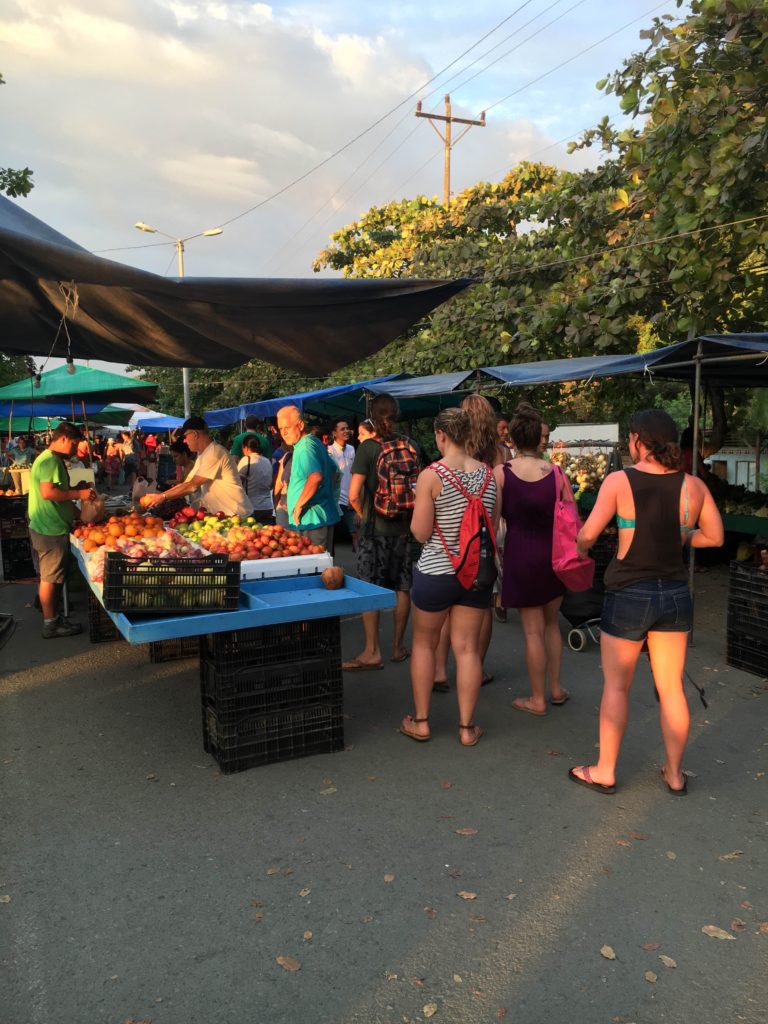 Paddleboarding at sunset. That was probably my favorite favorite part. It was just fun to paddle board on open water then you could lie back on your paddle board and just the waves and the birds and the sunset. It was just insanely beautiful. It was like you were living inside of Jurassic Park. Minus the t-rex trying to eat your face off. 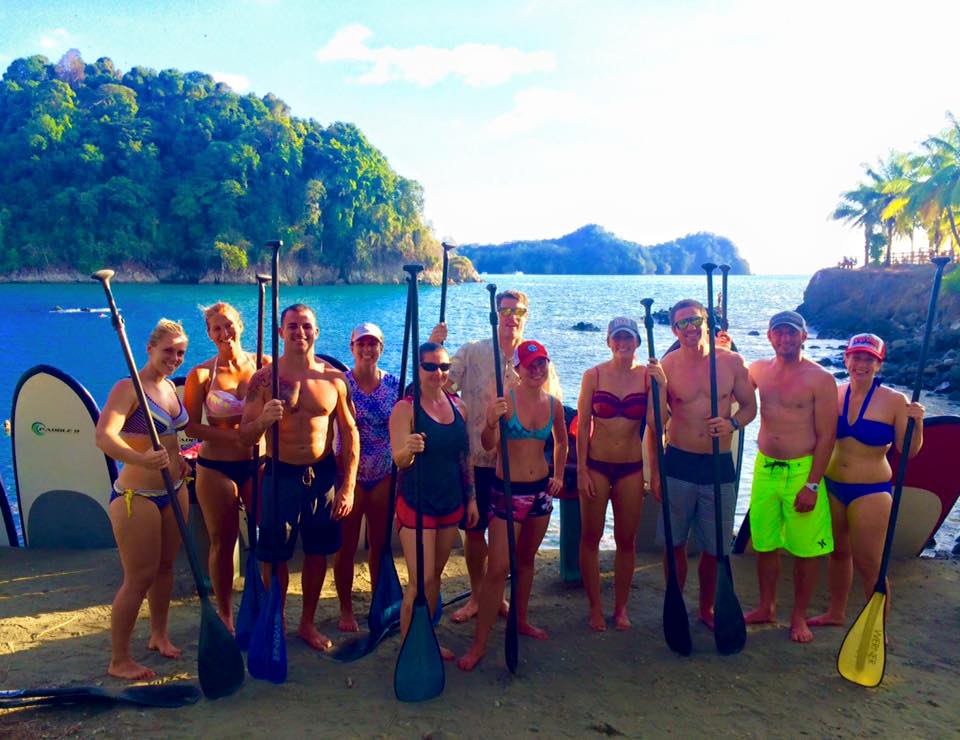 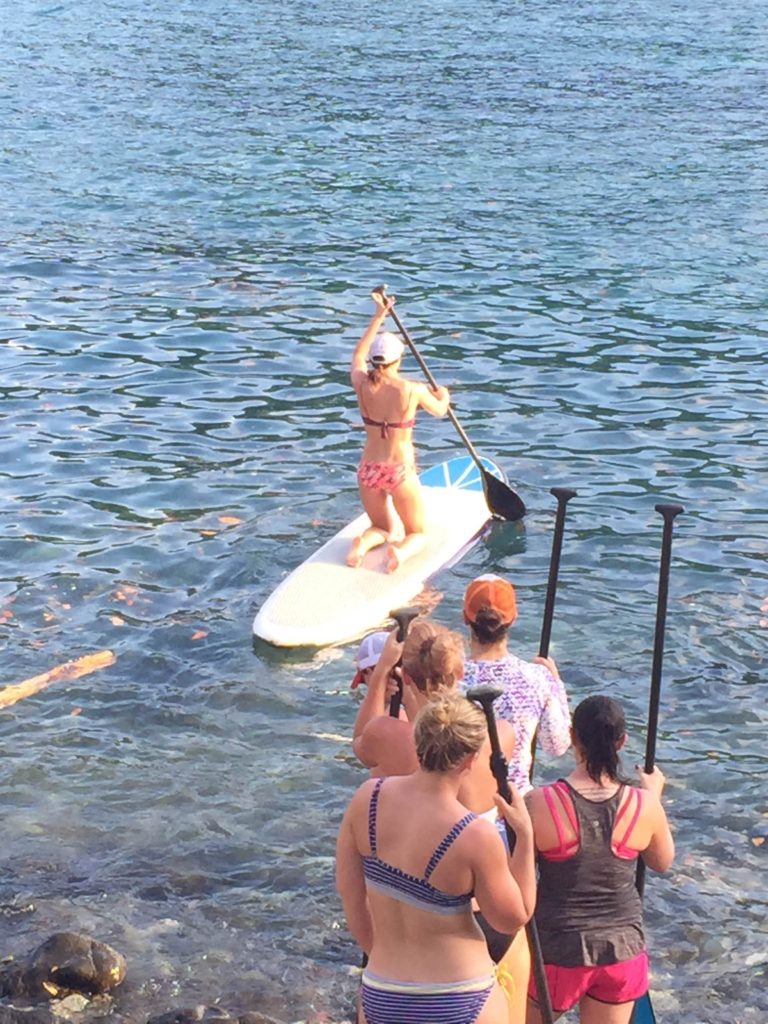 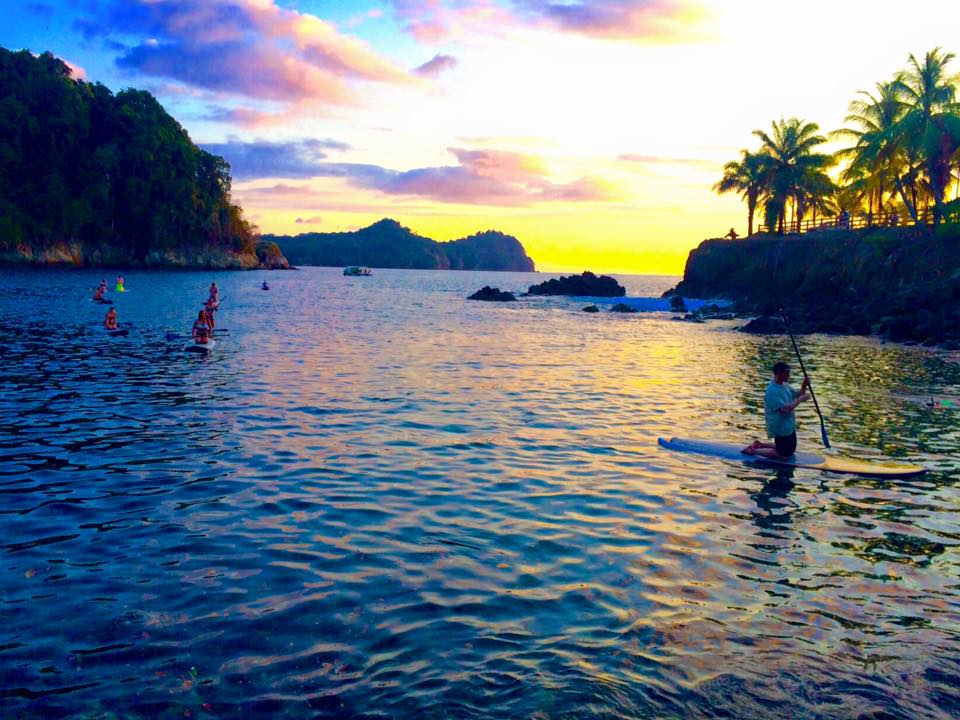 There were dogs everywhere. And not like just random dogs on the streets that weren’t ever fed or loved. No way jose. These were dogs that had families and were the happiest dogs on earth. They were on the beach, in the streets, and even at our hotel. They were just the best, especially when I was away from my own dog. 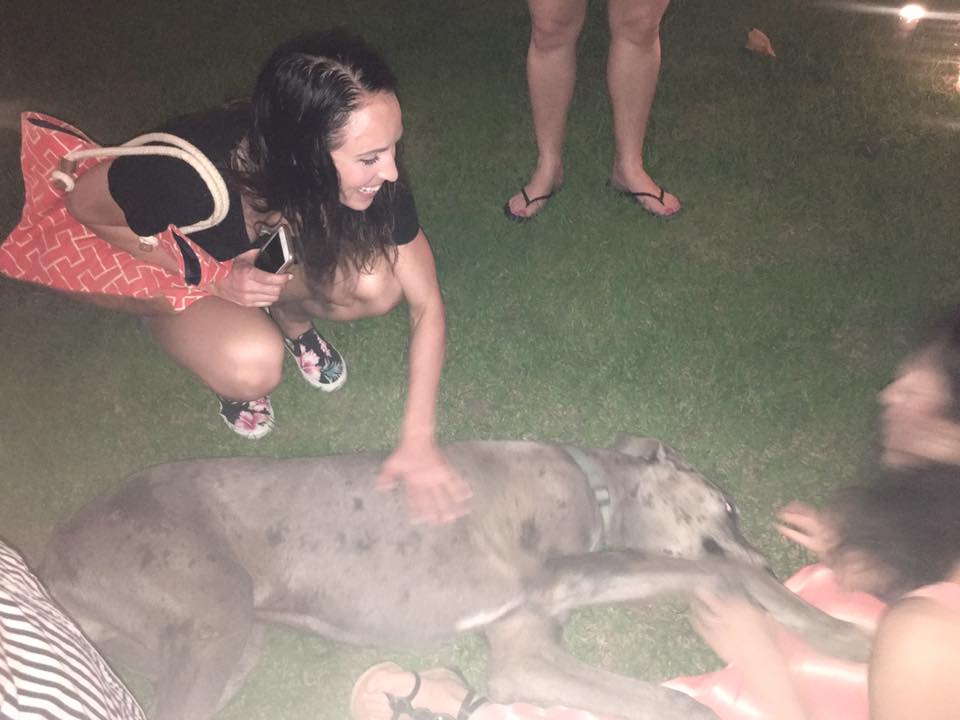 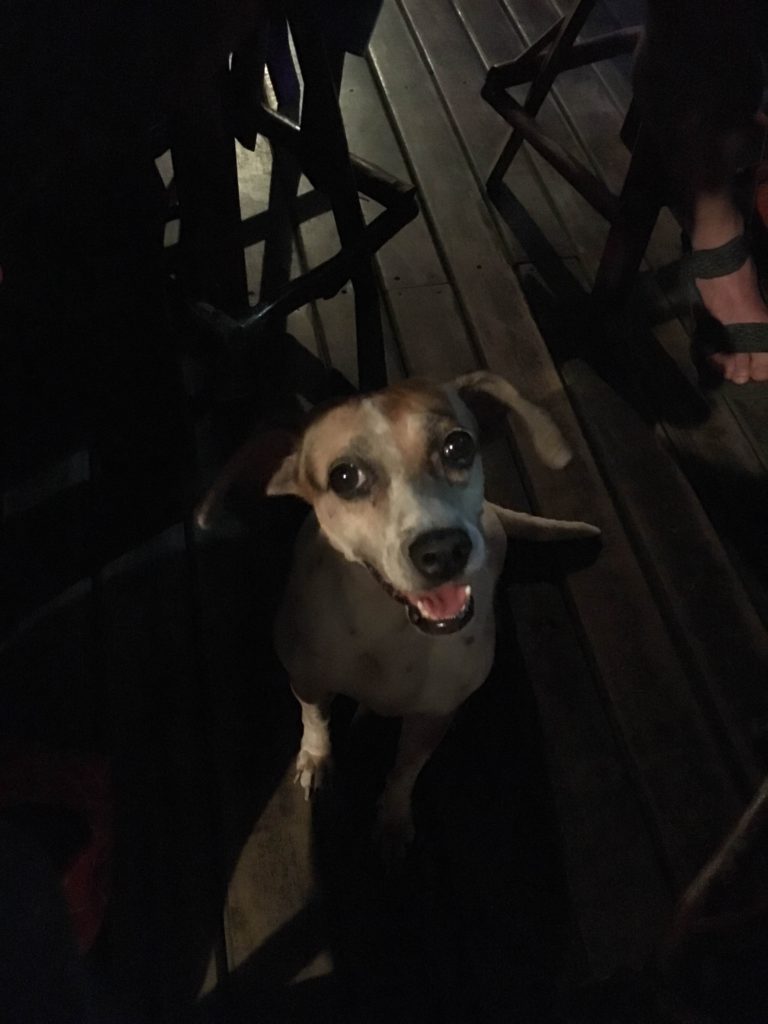 The other little jungle creatures. Monkey were everywhere, along with lizards and raccoons (that would steal your sh*t), sloths and turtles! 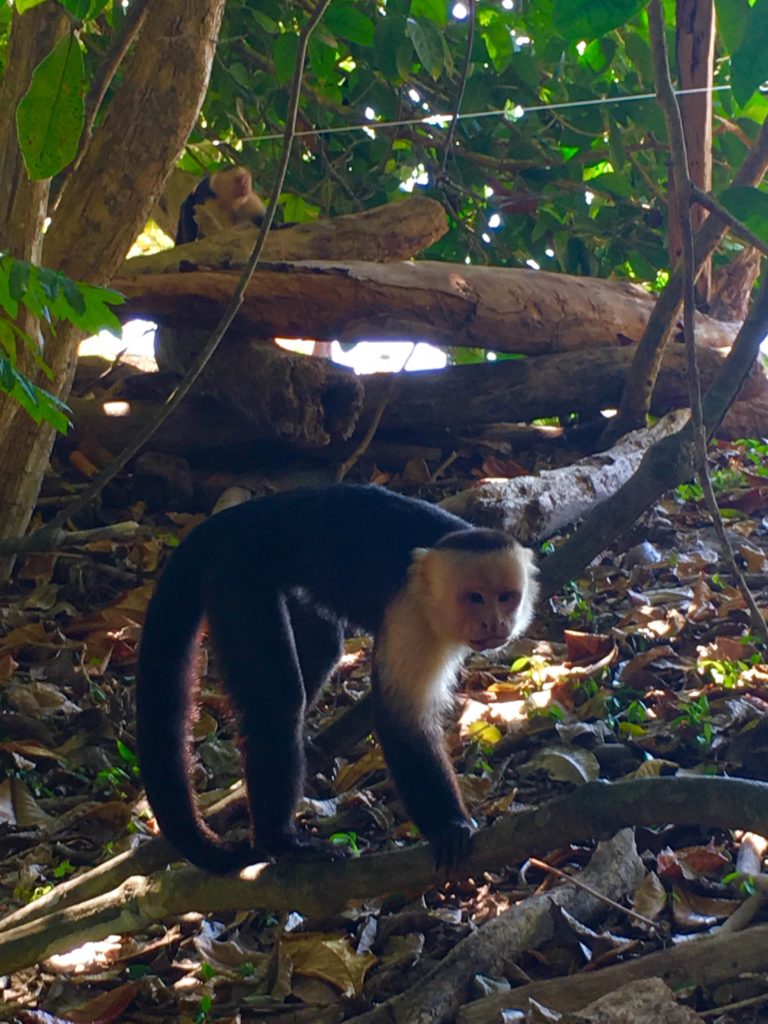 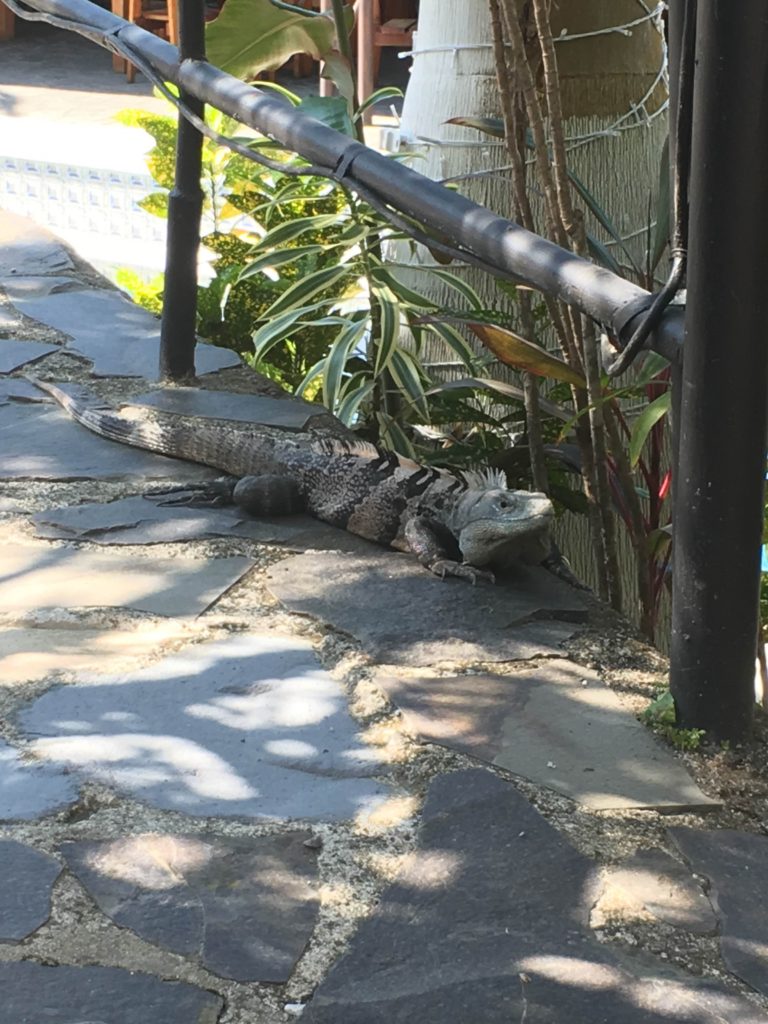 Working out with these lovely people! 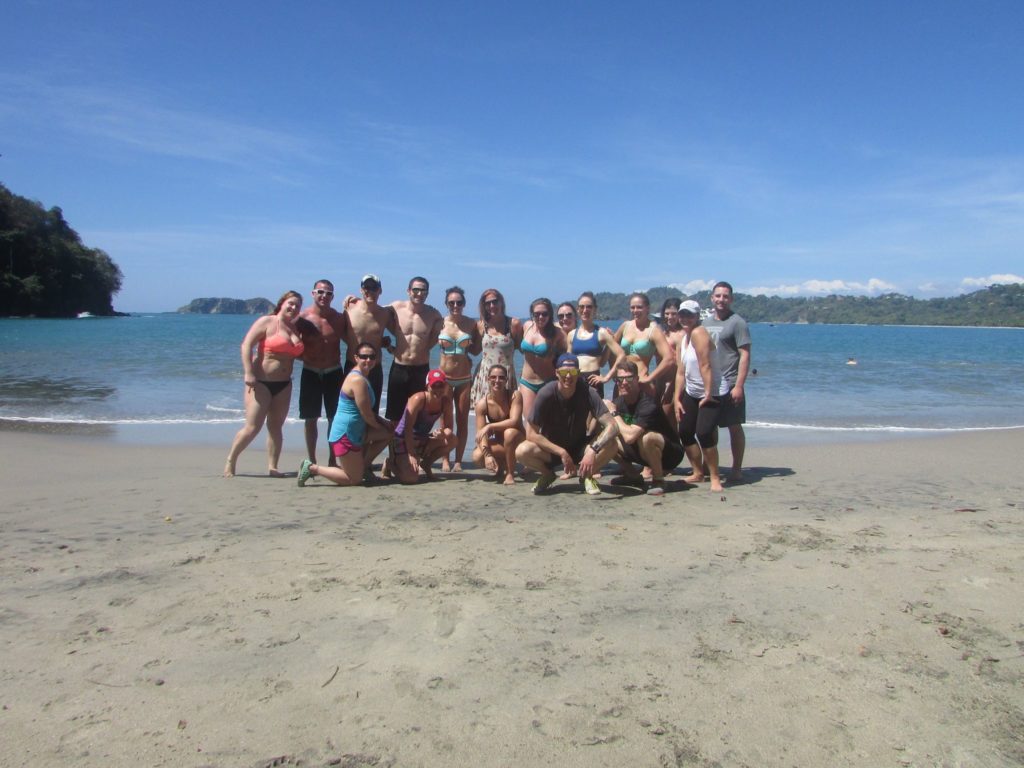 Things I would change for the next trip:

Can’t wait to plan my next retreat and see who I’ll meet on that one! 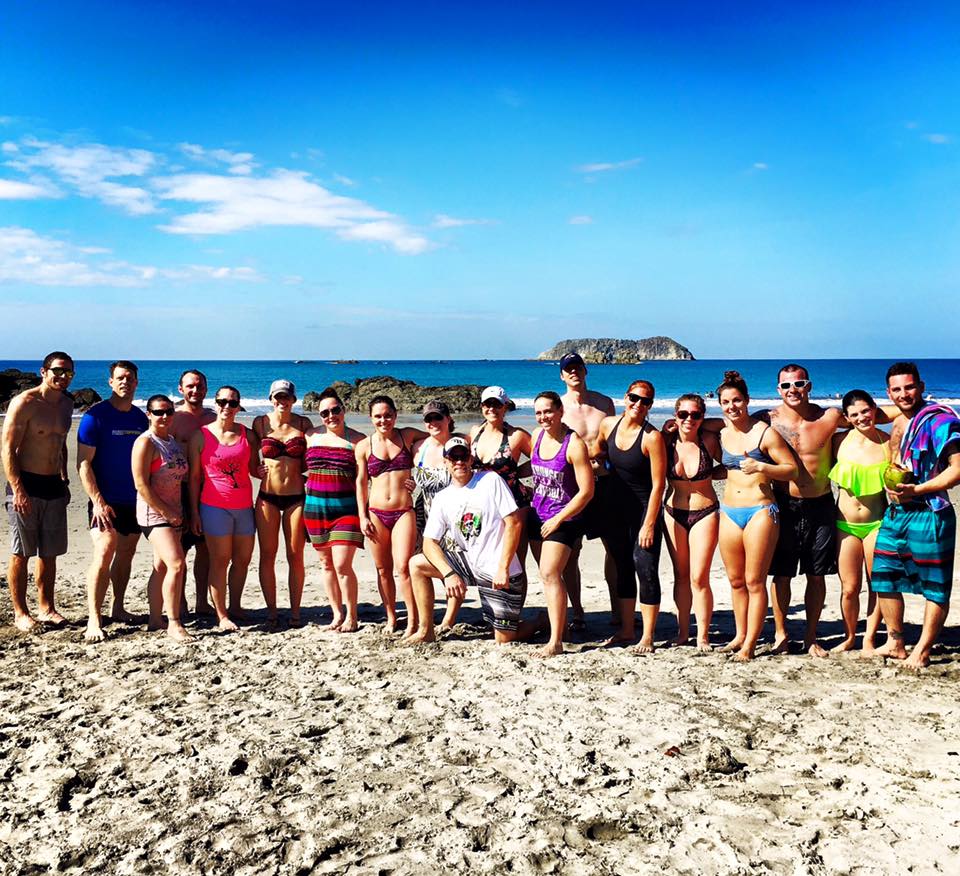