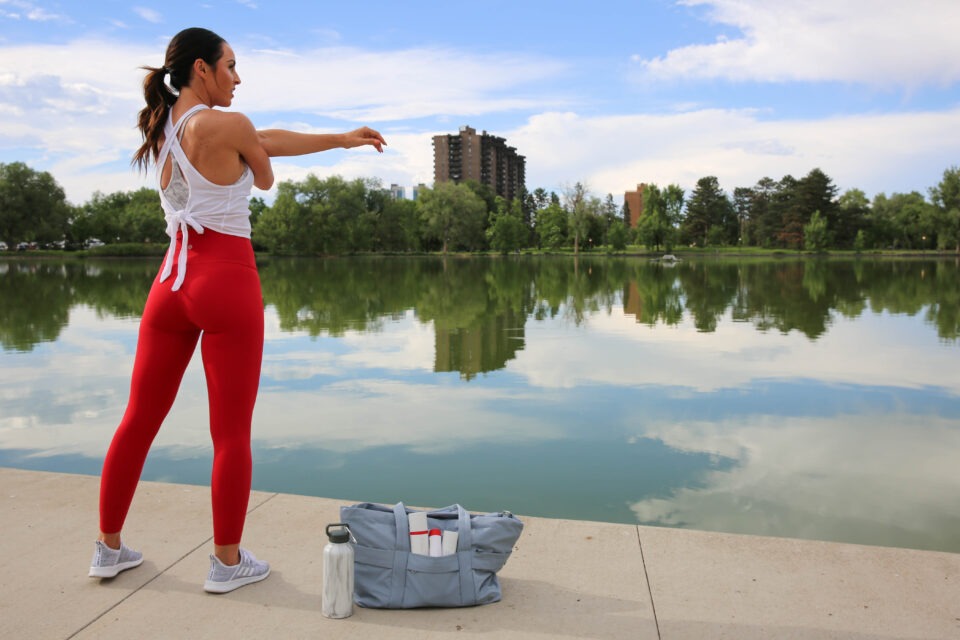 When I was younger, most of my life was spent on the scale. I remember finding my parents scale in their bathroom at one point so I started weighing myself just for fun since weight didn’t mean anything to me at that time. But then once I became a teenager and started becoming more aware of my body, the scale became an obsession. I would weigh myself every morning, cry whenever it wasn’t where I wanted it to be, then think all day about how I would make sure my weight was lower by the next day. Then my feelings of insecurity were continually affirmed as I read the fitness magazines and watched commercials for diet pills. My weight became my identity – an identity I was never happy with and an identity I could never live up to.

I don’t know when I went cold turkey with the scale, but it had to have been right after I stopped competing in CrossFit. During my competition days, I had put on 30 pounds and I was quite uncomfortable. I wanted to lose weight, but I more so wanted to stop being so obsessed with my weight. I was dating my now husband at that point and he never worried about that. He would work out, try to eat as healthy as possible, party, then move on with his day. He never obsessed or talked about the weight he gained over the weekend. He just went about his day, thinking about what had to get done instead of the number that showed up on the scale. And I wanted to be more like that. So I ditched the scale and I never went back. Even at the doctor’s office, I would close my eyes while I was on the scale and ask the doctor not to share the number with me. Because when I finally went cold turkey, I was simply free. My brain was free to concentrate on other things and enjoy the world around me. And the last thing I needed was for a number to get in there and start the obsession process over again.

Someone reached out to me recently asking about my weight and sharing thoughts about her own and the number changing on the scale. And it was a good reminder that not everyone has broken free from the scale. So I thought I would share some thoughts about that pesky little scale today. If you’re someone who weighs yourself daily, I think it’s important to ask yourself why. I can absolutely see why the number on the scale can be inspiring and motivating when you’ve decided to make a healthy change in your life and you begin to see the number go down (or up, depending on your goals). But what happens when those numbers go the opposite direction? What happens when it’s 2 pounds different than yesterday? What happens when you’re 10 pounds more than before, now that you’ve started to put on muscle? Even though that number started as a motivator, in turn it becomes your enemy.

As you think about why the number on the scale is so important, I want to share why it really doesn’t matter. Because so many other things matter so much more. Like the fun you had at the baby shower with your friends, drinking champagne and having some cookies. Or the best time you had out with your friends for a secret santa party, drinking a couple margaritas while you were out. Or the new restaurant you tried with your parter, eating food you normally wouldn’t. All of these things that may change the number on the scale matter so much more longterm. These are memories you won’t get back if you’re constantly worried about the number on the scale the next day.

Bodies will ALWAYS go up and down in weight. Say you had a lot of salt last night, weight goes up. Say you didn’t drink enough water, weight goes up. Say you enjoyed your holidays, weight goes up. Say you’re inflamed from a tough workout, weight goes up. There is a lot a sh*t that changes the number on the scale, but that doesn’t mean it should effect your happiness. You know how you’re clothes feel, you know how you feel in your own skin, you know the person looking back at you in the mirror. None of this has to do with a number on a stupid machine. It has to do with what we tell ourselves every day and how we treat ourselves. I could weigh anywhere from 120-150 pounds and I could eat anywhere from 1500-3000 calories, but all those numbers are to me are exactly that – numbers. They mean nothing. I don’t know what they are and I don’t care. What is important to me is how I feel every day, the positive affirmations I tell myself, and the enjoyment I get from my daily life.

The number on the scale truly means nothing, it doesn’t matter. We’ve been told that our self-worth often comes directly from how much we weigh, but unless you’re tackling men professionally for millions of dollars or getting thrown in the air during a basket toss as you cheer competitively, that number on the scale is just a number that YOU told yourself is right or wrong. By weighing yourself constantly, you’ve put your self-worth in that number. But what if it didn’t have to be that way? What if you could get up every morning, excited for the day, excited to be your best self, and excited for what the future holds? Well it is possible. I’ve done it and I know you can, too. Going cold turkey with the scale was one of the best choices in my life. Since I cut it out, my life continues to get better and better. I’m free from obsessing and now free to enjoy life to the fullest. And I can’t recommend it enough.

The timing on this post couldn’t have come at a better time. I weigh myself daily and TODAY I woke up and decided I wouldn’t because I didn’t want the number to affect my outlook and attitude for the day. I have already planned for my good choices regarding meals and workouts for the whole week. Why I am worried about my weight? And the number is not going to change my training schedule or my meals. After reading this I will plan to NOT get on the scale this week. I’m ready to be free!

it truly is pointless. it means nothing in the grand scheme of things!

Needed this! Putting the scale away tonight.

I love this! I quit the scale two years ago for all the same reasons. I wear the same exact clothing I did then. The only difference is that I am 100% happier and enjoy so much more freedom in my food and fitness.

1. Scales are fickle assholes. Throw rocks at them.

4. Can you please have girl talk with Joy and Claire again soon?

5. Hope whatever you’re working through with the shrink went ok. And kudos to you for prioritizing it and going!

6. When you got the gift cert for your SIL from the psychic friend in Bali, did you tell her any info? I want a reading so badly but I feel like if i call someone and use my real name, they can just google me!! #skeptic

it feels so weird to call him Brian since no one has actually seen his face lol. and yes, i totally need to do a podcast episode with Joy and Claire again!! tell them to have me on since they have a real grown up podcasting set up…instead of my closet. and yes, you tell her your name, birthday, and where you were born. then she pulls how the stars were aligned when you were born. in theory, she could totally google you. but i promise you, the shit she tells you is something she could never find through the internet. she nailed the relationship i have with my mom and i haven’t shared specific details anywhere. it was insane.

I couldn’t agree more! I haven’t weighed myself in over a year and I’ve never been happier. Thanks for sharing.

For years I never weighed myself, but instead assessed my weight by how a certain pair of jeans fit. It worked and I didn’t think about numbers. About a year and a half ago I started weighing myself every day and it slowly started killing my joy. I put so much stock in what the numbers were and what I could do to either maintain a number I was happy with, or decrease a number I hated. Several months ago I decided enough was enough and I ditched the scale. Pretty much instantly I felt so much more at peace. It doesn’t mean my clothes fit perfectly every day – does that happen for anyone, really? But I am no longer spending so much precious time obsessing over a meaningless number on the scale. And like you, I turn my back to the scale when I go to the doctor and do not ask what it says. It doesn’t matter. I am healthy and fit and a dumb device isn’t going to steal my joy.

agreed!! it’s so dumb to let a number tell us how we feel about ourselves

I’m with you Juli – I quit weighing myself completely, and have never looked back! I just don’t care anymore and it’s SO nice!! I’m glad you’re encouraging others to do the same!

isn’t it the best?

Makes so much sense! Who cares about the actual weight?! I’m putting an end to weighing myself and my food TODAY!

I love this message! In the past two weeks, I’d gotten to where I was weighing myself everyday. The number going up was starting to fuck with my head, even though I was FULLY aware that since I’m working out and building muscle, the weight will go up before it starts to go back down. I’ve decided to say fuck the scale and just take measurements. And you know what?? I’ve lost inches even though I’ve put on weight! Now I will just occasionally take my measurements (Making sure not to become obsessed with that) and just won’t worry with what the scale says. Trust the process! I KNOW I’m eating right and working out, so eventually the weight loss will happen!

I used to weigh obsessively, thinking I needed to do it every day. Literally the minute I got out of bed, after using the bathroom, I weighed in. This went on for years. I thought I needed to do it to control my weight, but actually I wasn’t in control at all. I even put on 20lbs one year and weighing daily didn’t exactly stop that! About a year ago I gave it up and only weigh once a month now. I’ve actually lost more weight without it and now just go by how my clothes feel.

EXACTLY!! because you stopped obsessing and stressing. i don’t think people understand the power of reducing stress and how it will effect the body!