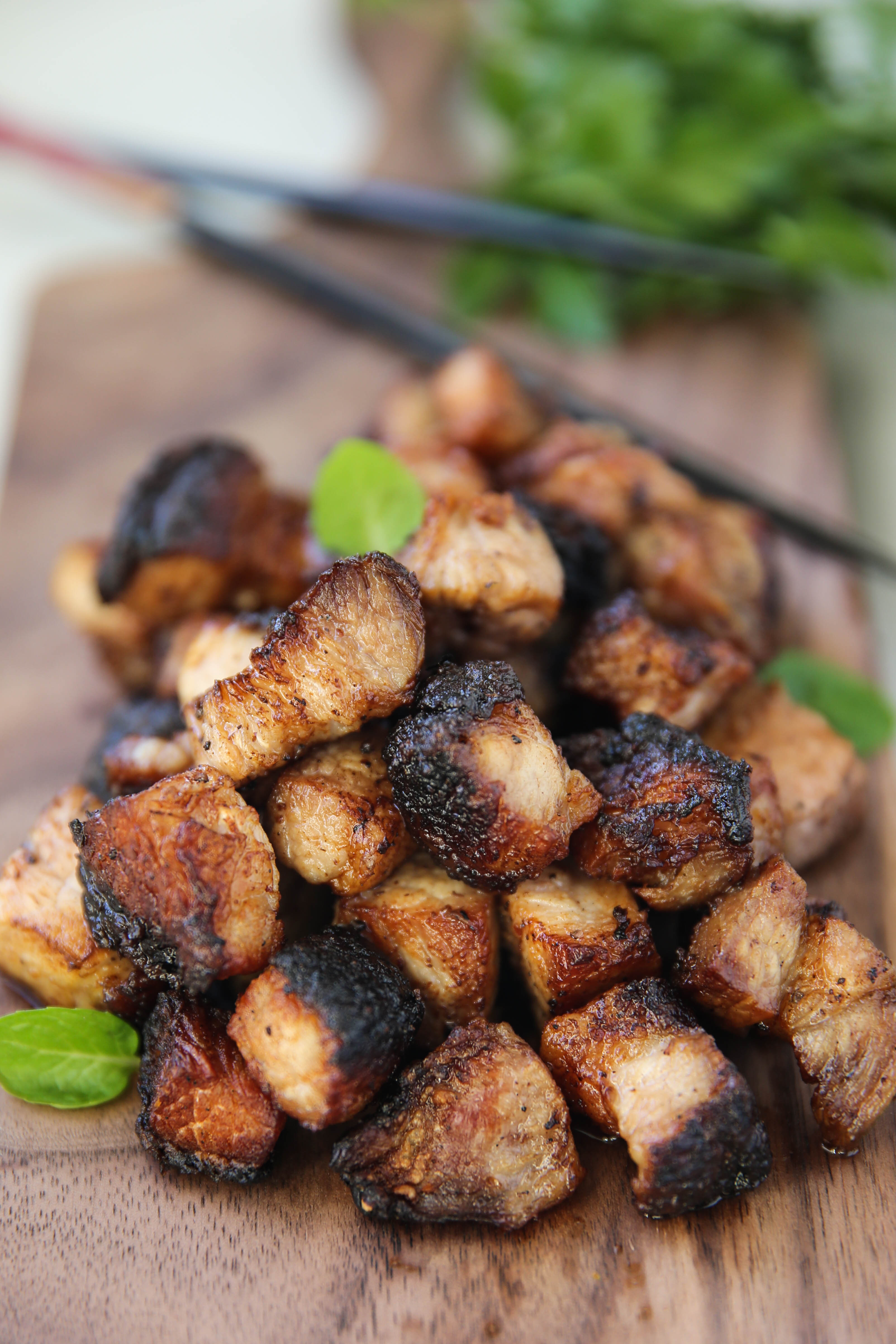 So here’s the thing – I don’t know if this should even be considered a recipe. Because it’s THAT easy. It takes minimal effort, very little time, and it creates divine pork belly. And it all starts with Fully Cooked Pork Belly from Trader Joe’s. You see, I went to the store the other day to get my hands on some uncooked pork belly. But they didn’t have any. So I went to another grocery store to get some…they didn’t have any either. So I finally went to Trader Joe’s to search for pork belly and I finally found it…fully cooked. And since it doesn’t have any weird ingredients, I said F it, bought 2 packages along with 4 packages of Cauliflower Gnocchi and I went on my way. At some point I’ll be making uncooked pork belly in the air fryer, but for now, it’s all about spending the least amount of time in the kitchen as possible. And that means Trader Joe’s to the rescue! As much as I would like to talk about pork belly this entire post, I’m over it. Let’s talk about the weekend instead. Because it was super effing weird. My husband left town on Friday to head to Nebraska to celebrate a friend’s 40th birthday. But since I had too much work to finish, I stayed home and didn’t leave town until Saturday. And since I made the huge mistake of trying to change my name on my TSA pre-check during the governmental shutdown, I still don’t have TSA pre-check. So I left for the airport even earlier than usual since it was snowing, I guessed security lines would be madness since there are less TSA workers now, and because I would be in the normal security line. Well that was a mistake because traffic was not bad, I found parking in 12 seconds, and there was a whopping 3 other people in the security line. So by the time I got to my favorite restaurant in the airport, I had 2 1/2 hours to spare. I am such a psycho about getting to the airport early because the ONE time you don’t, you’ll miss your flight. But being there that early blows ass too. I guess people don’t travel that much on Saturdays? 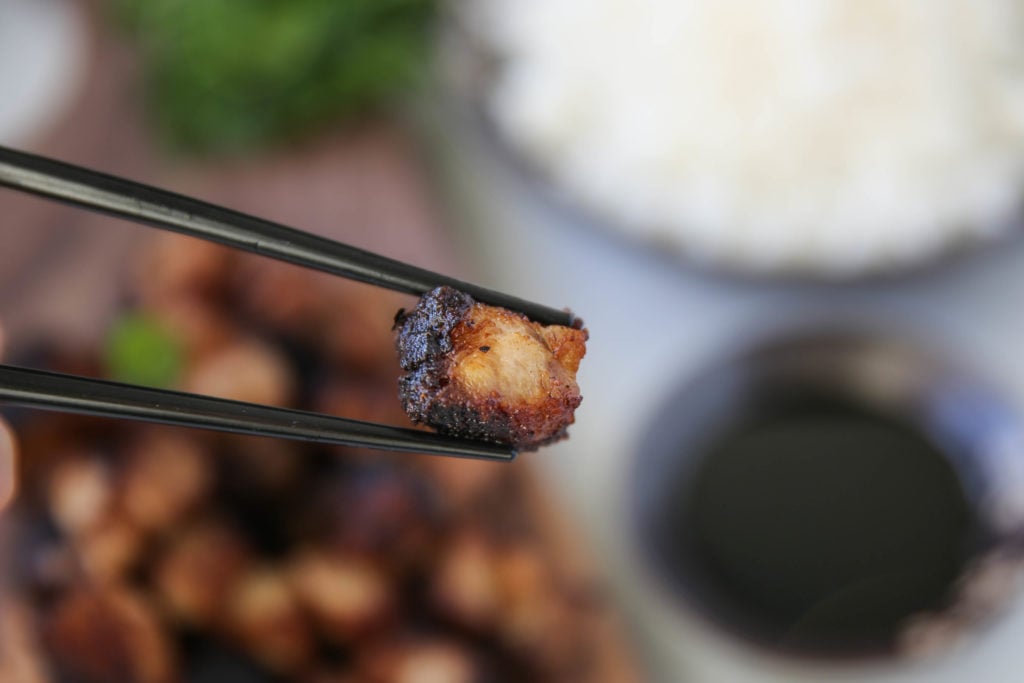 Well once I landed, my SIL picked me up and we had to go straight downtown to shoot photos in the dumping snow for an upcoming post then I had to go to my MILs house to finish work. All of this is quite boring, I’m aware. Hang in there. After working, we headed to our friends party for the night. So here’s the thing – ever since the New Year, I’ve been staying away from alcohol and sugar. I normally have a treat every single night and I cut that out. And alcohol is just poison so I don’t drink it unless it’s some fancy ass cocktail with 47 ingredients and costs what a child would if I had one. But if all that is offered is beer or vodka soda, it’s pretty easy for me to stay away. Well I don’t know about you, but staying sober in a room full of drunk people when you don’t have your own car to leave can get a little tough. So as more people got drunk, I went back to the taco buffet more and more. And on that taco buffet sat these frosted little brownies, ready for the takin’. And to keep myself away, while also PMSing, I ate solo cups filled with rice and beans. They were out of plates. And not just one cup. It was probably a solid 8 by the end of the night. But you know what? I stayed sober and stayed away from the brownies. Instead I woke up with a wicked stomach ache and felt hungover anyways. Who knew that you could OD on rice and beans?

You know when I told you to hang in there? I’m sorry.

*If you don't to be even lazier, remove this step all together. I've made the pork belly without the marinade and it's just as tasty and juicy! 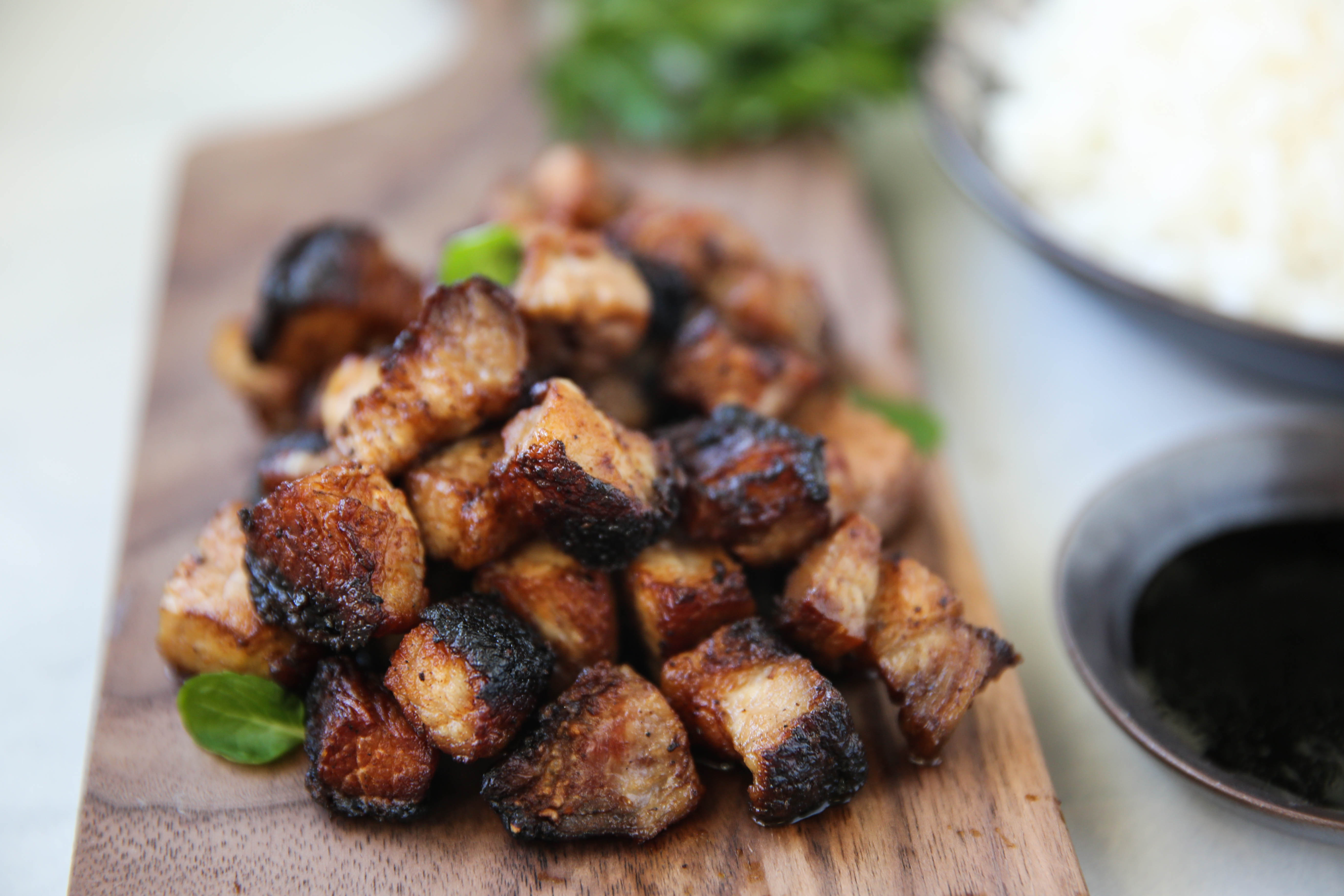 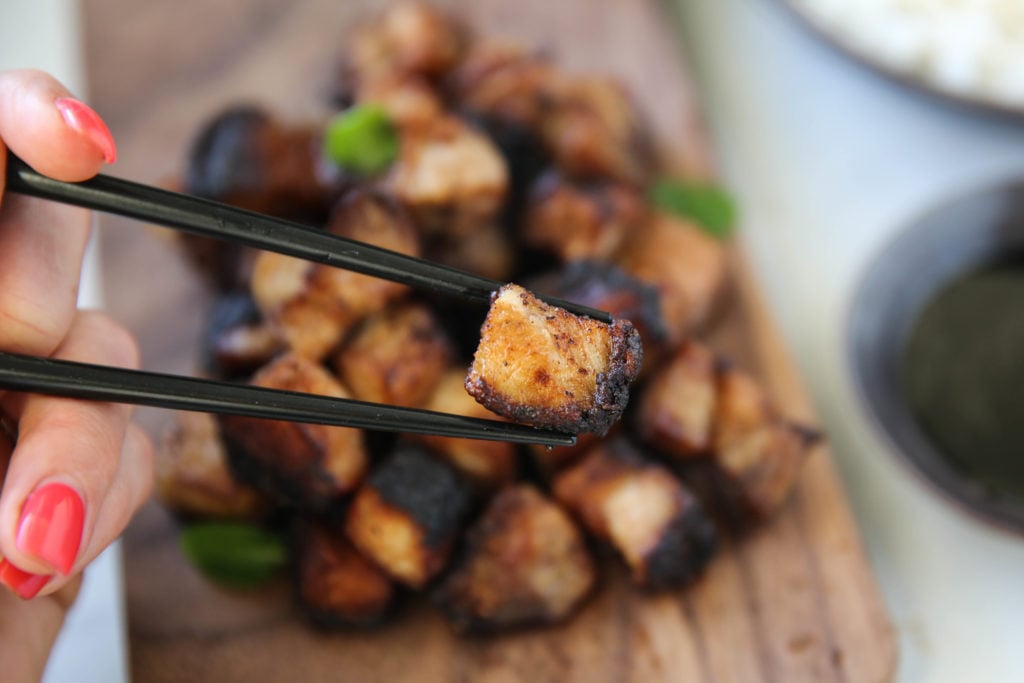 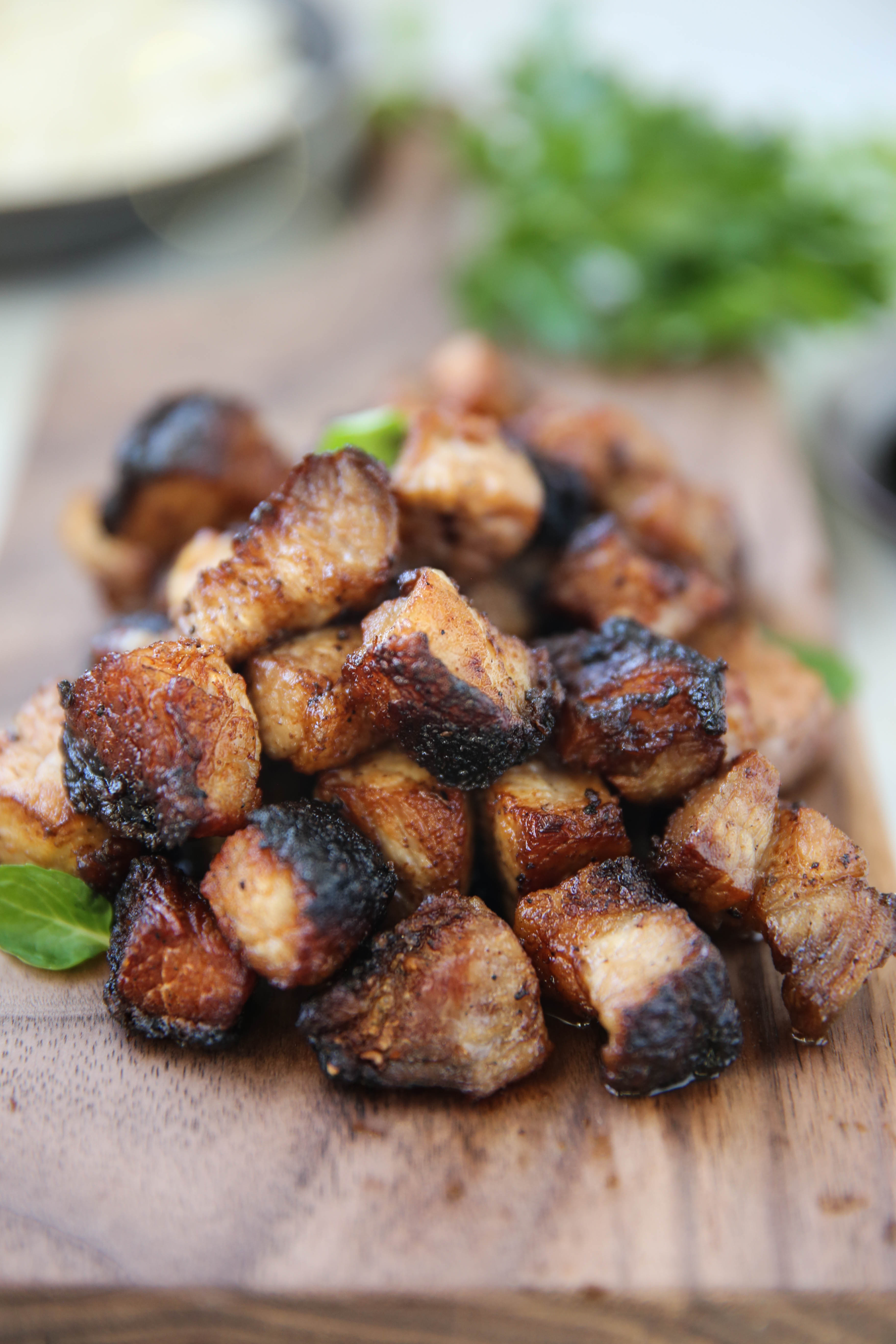 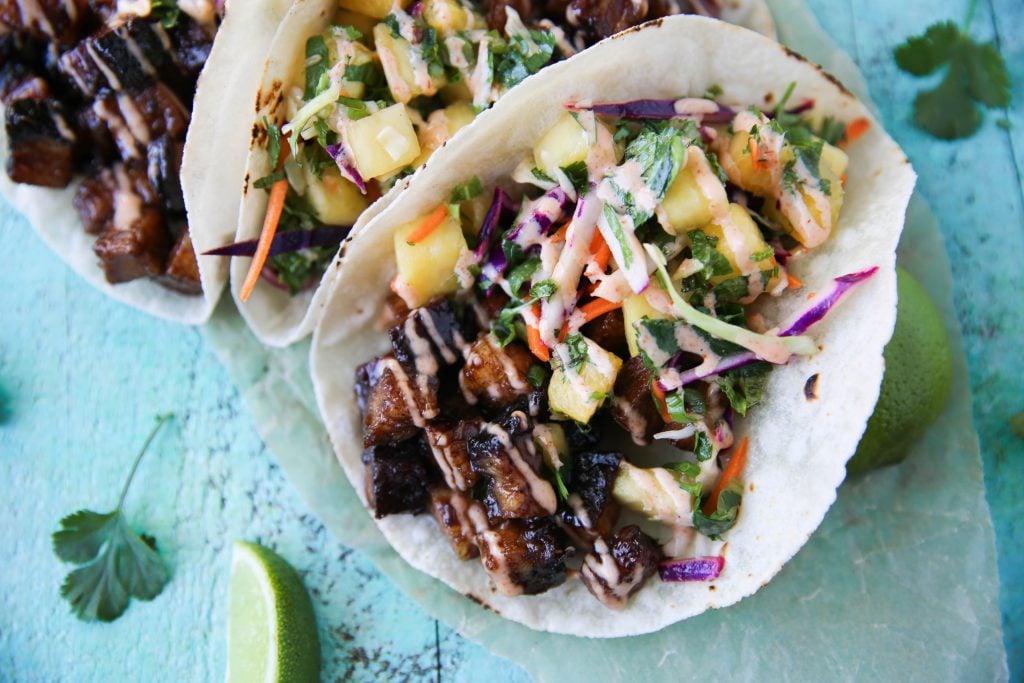 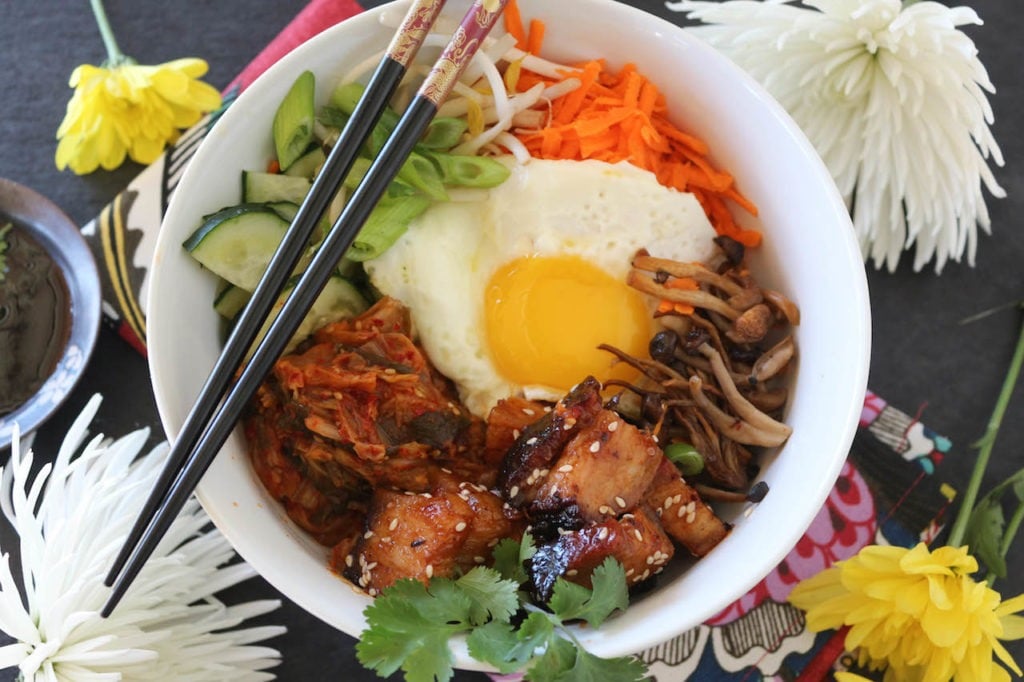 This looks delicious, but I can’t say that I’ve ever even had pork belly! I’ve lived a sheltered life, what can I say… What do you serve this with?

i put it in ramen, curry, on a salad, with veggies. really whatever you want to serve it with!

If you’ve had bacon then you’ve had pork belly. Pork belly is uncured, un-smoked and un-sliced bacon.

Definitely making this for Super Bowl!
Any suggestions on a replacement for coconut vinegar? Apple cider vinegar?

that would work. i also use rice wine vinegar, which isn’t paleo but i prefer in asian style recipes

Umm, what happened to the Bachelor recaps? I stopped watching the show years ago, but live for your recaps!

i just felt like people didn’t really love them. plus i’m not watching it this season since colton is so incredibly boring and all the girls are 20 years old

HA i don’t know about that Kari lol

So exited to try this recipe!!! Will you link your air fryer? I’m going to purchase one.

hey lori!! it’s actually already linked in the post, within the recipe AND at the end of the post where it lists the items i used to make the recipe!

Do you have to use the fully cooked pork belly? Can you use fresh pork belly from the deli? How would that change the preparation? I just bought the Ninja foodi and last night was my first meal made with the air fryer attachment. Game changer.

Yes, please! I live in Canada and don’t have Trader Joes here. Please post how to modify this for raw pork belly!

i’ll definitely do that in the future when i test it out!

i haven’t tested it that way yet. once i do, i’ll definitely share it on the blog!!

Well I was excited to find pork belly at Costco here in Ontario, Canada. I know it’s not the ideal place for meat, but…..I bought it! I bout an air fryer before Christmas and same….. I keep thinking about using it! Lol ???? this is going to bring it out into use! My pork belly is raw so just need to adjust the time. ❤️ Thank you!!

Is there a way to make the pork belly without an air fryer?

yep! you can follow the directions in this recipe – https://paleomg.com/pork-belly-tacos-with-pineapple-salsa/. and if you’re using trader joes already cooked pork belly, you can cook it up in a pan until it’s crispy! it won’t be quite as crispy as an air fryer though